Austin Marathon is two weeks away!  We woke up early and tried to decide if we should try to squeeze in one more long run (Good Table and back would be about 22 or so), or start our tapers as our training plans are telling us to do (a 10 mile loop could put us pretty much anywhere in Portland).

I think the long run would have been good for us psychologically but physically cutting it a bit close with time to recover for the marathon.  At least that’s what I convinced my lazy self made sense.

So, we woke up and debated about that for a while then went back to sleep and woke up again and struggled some more with the decision.  We finally figured out a loop that would give us about 8 miles before we ended up in town.  (One of my favorites; Back Cove to Eastern Prom Trail to Fore St. to Danforth St. to Pine St. to Congress, etc.)  Still we hadn’t decided on a place until after we crested the hill by Western Cemetery.  Maybe, subconsciously, we wanted to see if we would make it before we got excited about breakfast.

Since we got a much later start than usual, we had a lot more options as far as what was open.  We were on the fence between Slab and Isa and happily ended up at Slab.  (Not to imply that Isa’s not good – we haven’t been there yet, and I think it would have been more lunch than brunch.  Soon, we’ll get there.)

I think it was probably around 11:30 or so when we got there and were able to get right in and sit at a nice quiet four-top by the window.  We had a nice view of the little square there. 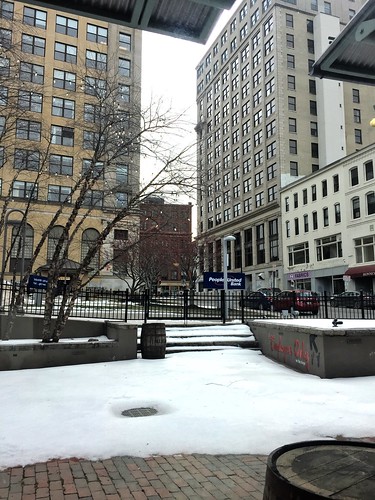 I think their patio must be great in the summer and fall, but it was empty today.  I had a good view of one of my favorite fabric stores in town, Z-Fabrics, but was really just focused on food and drink right then. 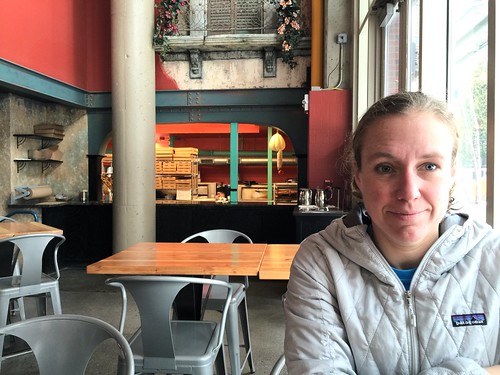 (Or maybe nothing, I look pretty spaced out.)  The decor is simple and clean but not too Spartan.  Looking up we could see remnants of the old Portland Public Market and missed our visits there long ago.  We wondered if it would have been more likely to survive in today’s foodie world. 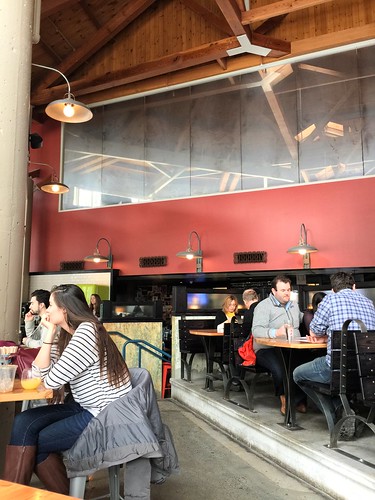 We both started off with mimosas.  It was one (okay two) of the best I’ve had in Portland.  I will drink just about any mimosa, but I am pretty picky when it comes to judging one.  I like it to be mostly prosecco/champagne with just a splash of juice.  These fit the bill nicely and were also quite a generous pour – and only $4. 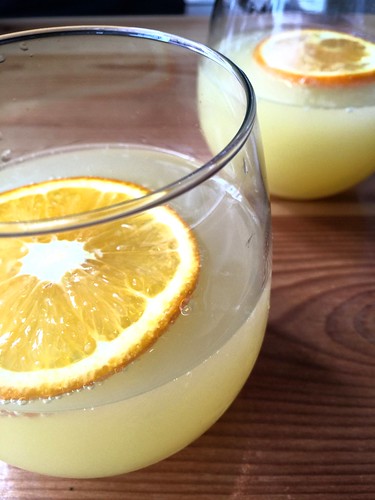 The menu was a glorious carb-lover’s dream (although they did have plenty of bread/gluten free options).  It pained me to have to just pick one thing.  The “chit-chat” (some kind of fried dough), blueberry cornbread (anything but ordinary cornbread), and pull-apart bread box jumped out at me immediately.  The scrambled egg sandwich cone (beer-batter deep fried Luna wedge?!!!!) and “eggs in hell” were also calling my name.  Oh how I agonized!  In the end, I decided to give in to the Katie I know, and go with the highest carb dish.  I mean why waste any calories on veggies or protein?  I got the pull-apart bread box.  The only regret I have is that I couldn’t eat the whole thing – no matter how slowly we ate and how long we lingered.

The bread was called poppy seed schiacciata.  The closest thing I know of to what it was is a giant, light, tender fougasse.  If you’ve had the luna bread from Slab or Micucci’s, you’ll understand how light and fluffy this was.  It also had a nice touch of olive oil like you might expect in focaccia. 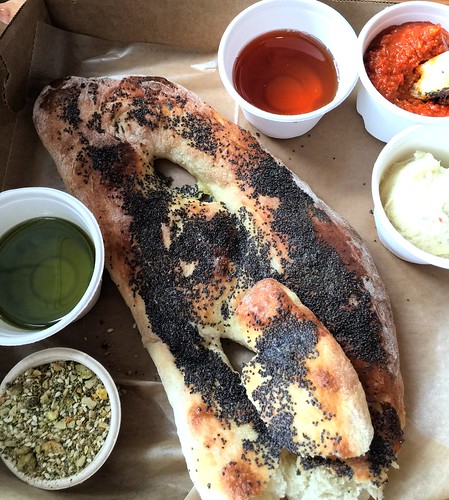 It came with all kinds of wonderful things to dip it in.  My dream meal!  My favorite was to dip it in olive oil then the pistachio dugga (chopped pistachios, sesame seeds, salt, and other delicious spices). 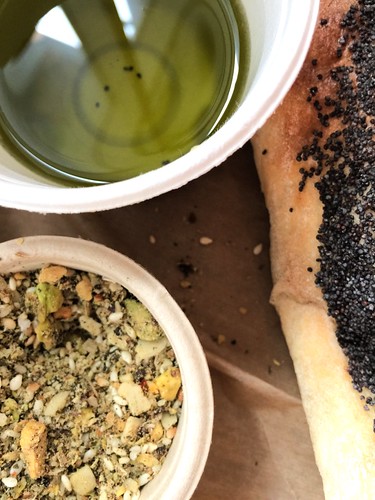 My second favorite was the sugo di pepperoni – a perfectly spicy tomato sauce.  It also came with warm honey and artichoke ricotta – both also good.  If we hadn’t been running, I would have brought every single sauce home to savor with other (of course, substandard) bread all week long. 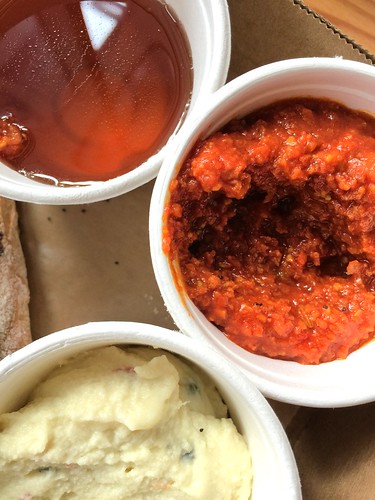 That’s the sugo di pepperoni on the right, artichoke ricotta on the bottom, and honey on the top.  I wouldn’t be sad if they replaced this normal honey with Mike’s Hot Honey.  (And I don’t mean me.  LOL.)

Mike had the “hangover wedge” which was also amazing.  Think their classic Sicilian Slab with it’s wonderful crust topped with perfectly crispy pepperoni and all kinds of wonderful other stuff.  We were scheming on how to duplicate the bacon roast onion at home.  He also got the slab scramble (one of your gluten free options).  The eggs were made wonderfully fluffy with sour cream and the pepperoncini were a really creative addition (but not spicy enough for me), but, for me, they just didn’t stack up to the more carb-y options. 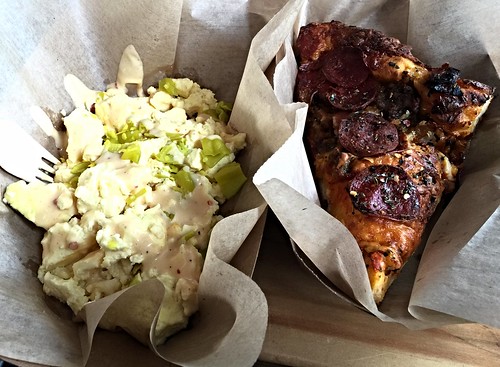 All in all, it was a wonderful experience.  We lingered.  We read the Portland Phoenix.  We agonized over our children’s lack of desire to drive (we would have called for a ride in a heartbeat).  Our waitress was great- checking in as soon as our mimosas got low but not rushing us at all.

I love Slab as a lunch/dinner place, and it seems like restaurants like that often do breakfast/brunch as an afterthought, but definitely not so with Slab.  It’s unusual for me, but I think I actually prefer their brunch menu.  (But definitely don’t skip it if you’re not here on a Sunday.  Go!  And, if nothing else, get the classic namesake Sicilian Slab.)

They serve brunch until 8:00 tonight.  Would it be weird to go twice in one day?