Don’t worry we didn’t pull a Pheidippides after Austin.  We’re really still here, and I still plan to blog about the marathon and the rest of our trip because it was really great, but life moves on.

I’m in the midst (or really end) of getting ready for Boston.  I finished my last long run today.  It was supposed to be on Sunday, but it was Easter and we were visiting my dad in major-hill-country, so I postponed. (I’m following the Hanson’s training plan which has you run 16 for your longest, but psychologically, I feel like I need to do at least 20.  This is my shortest long run, since my first marathon.  Eeek!)

I even decided to take the day off of work for it.  Got to get those priorities straight, right?  It was pretty nice not to have to rush.  Sadly, my pace shows that.  Oh well.  This Boston is not going to be my best.  My training has kind of fallen apart since oh, about Thanksgiving time.  I just can’t seem to hit my miles per week.  Maybe it’s time to capitulate and switch to just 5 days a week?  My current thinking is that fall marathons will be my thing.  So much easier to train in the light and warmth of summer mornings.

It was a nice run today anyway.  My toenails hurt.  It’s our second 60 degree day so far this year, so I’m wearing my flip flops.

I ran to Higgins Beach.  My first time running to Scarborough.  I remember the first time I ran out of Portland into a different town.  Seemed like a major big deal to me to run all. the. way. into. ANOTHER. town! 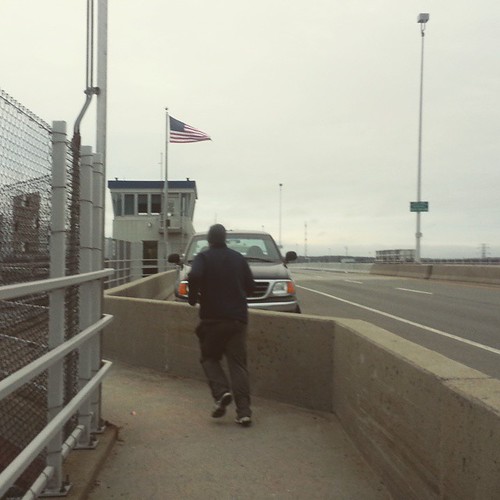 Since then we’ve run to Falmouth, South Portland, and Cape Elizabeth a gazillion times, Westbrook once or twice, but never to Scarborough, so that was kind of cool.

I wasn’t really sure where I was going, but when I reached the little (closed up for winter) store where Mike, Frank, and I got highly-recommended onion rings a summer or two ago, I knew I was close.  It was nice to hear the crash of waves as I approached the beach.  As I ran by Higgins Beach Inn, I remembered being near there on a summer evening and hearing live music on their porch.  I have to investigate whether you can go there for a drink (and music).

As I’ve mentioned, I love an out-and-back because it’s so nice to be on the way back, but I swear I don’t remember going down the hills on Sawyer Street that I had to go up on the way back!

I’m not sure if it’s a best practice, but I recovered with a hot bath and our last Shiner Bock (we purchased here in Westbrook Hannaford of all places as a nod to our Texas trip).  We were out of protein shakes.  Beer is the next best thing.

So tomorrow is April.  Yikes!  As soon as that calendar rolls over, my nervousness (“nervcited” as my 8-year-old calls it) for Boston is going to increase exponentially.  Still, now that I’m a veteran, I don’t think I’ll be as nervous as last year.  Plus, there’s not much I can do now to change my fitness level.  Just got to do those last few runs (not that I’m counting, but 106.5 miles left) and try not to pig out too much.  I’m enjoying a mimosa to celebrate my last long run, but no more until April 18th.  Anyone else out there doing Boston?  Want to meet up?  Ride the bus to Hopkinton together?  I’m in Corral 3, Wave 1 (Wave 3, Corral 1?)

I’m excited about the expo.  I’m planning to set aside $200 from my next two paychecks to blow there.  Funny thing about last year. We looked around at the first “room” and were surprised that that was “all”.  Then we crossed some threshold, and it was like an oasis of running paraphernalia in the desert.

If you haven’t gone to the pre-race dinner, definitely do that.  It was pretty awesome to have previous winners and Olympians plop some pasta and salad on your plate.

Happy Running.  Hope to be back soon with the rest of Austin and some Boston adventures.  Next up after that, Chicago.  Anyone else in?

Mike got in to Beach to Beacon.  I didn’t.  Typing on my dang phone was just too slow.