Trip Number: 5
Where: Tandem Coffee + Bakery, Portland, ME
Date: Wednesday, November 2, 2016
Katie: Cappuccino
Mileage: 6.62 miles
Bike Friendliness:  Good.  No visible bike posts to lock up to, but I did find a street sign.  I originally was going to lock up to Tandem’s cool tandem sculpture, but then I thought if it really is art, they probably don’t want bikes and locks all over it.  After I locked up to the street sign and was sitting drinking my coffee, I saw another biker ride ride up to it and lock up to it like he did it all the time.  So, if in fact, this is a bike rack, it’s the first coffee shop we’ve been to that has it’s own bike rack – so the most friendly relatively. 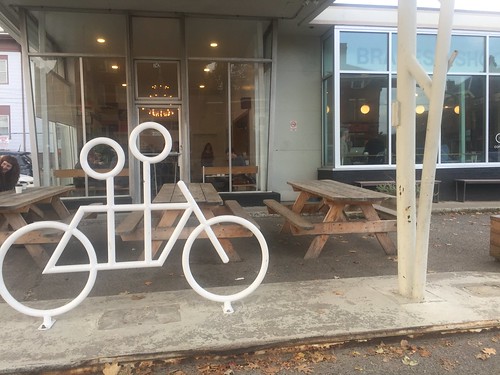 Actually I suppose I should rank them even higher, since how many coffee shops are so bike friendly, they actually have a bike theme?  Isn’t their logo great? 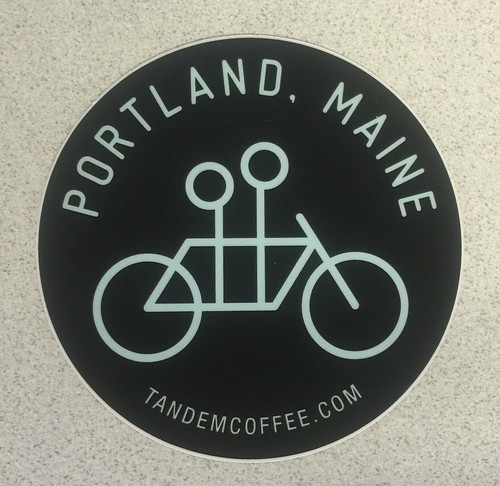 I work from home on Wednesdays, so I decided to trade my morning run in for a bike ride and took the long way over to Tandem.  Don’t tell Addie, but I thought it would be nice to get in at least one more Coffeeneuring adventure just in case we’re not able to make it out together for our three remaining adventures.

I also have a bit of a dilemma as far as getting Addie into town.  We live in the Deering part of Portland which used to actually be a different town, and no matter how hard I try, there’s really no way to get to the downtown (where most of the coffee shops are) without tackling a huge hill and a fair amount of traffic.  You can add a few extra miles and take some trails part of the way there, but I haven’t figured out how to do that without being in a lot of traffic after we get off the trails.  Maybe we’ll just walk up the hill one of these days.

Because of the bike theme, I just HAD to include Tandem, so it seemed like a good candidate for a solo adventure. 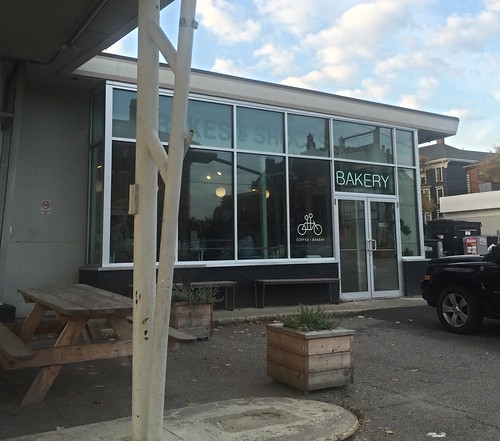 They remodeled an old gas station which is pretty cool.  You can imagine where the gas pumps were in the photo above and in the top photo, and if you look carefully in the photo above, you can see where it still says “Brakes & Shocks” behind the glass.

I’m still all about the baked goods, and Tandem has some of the best in town.  You can catch a glimpse to the right in the photo above.  I’ve heard their sandwiches are also really good, but I’ve never been able to pass up my current favorites to try one.  They serve beer and wine later on in the day.  (Well, I assume later, I suppose you could have one for breakfast.) 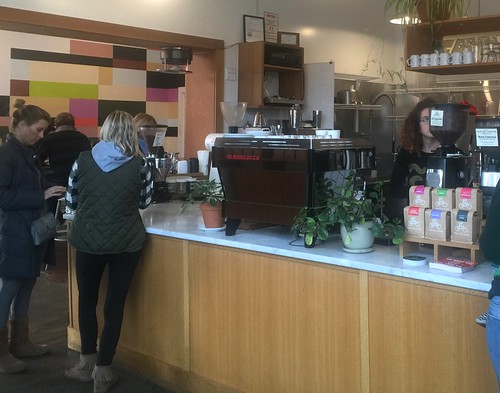 I’m still not much of a coffee connoisseur, but their set up looks pretty fancy, and I’m sure they probably roast their own beans.  I branched out and tried a cappuccino this time.  It was delicious.  I want to learn how to do that latte art. I think it’s so cool.  I tried it this morning on my son’s coffee and only managed to make white blobs. 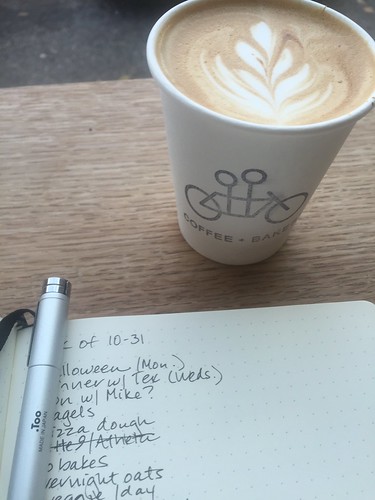 I tried to make it look like I was being productive while I was sipping my coffee, but all I managed to do was review a to do list I had made earlier in the week.  This was my view from my stool at the window.  Nice light, huh? 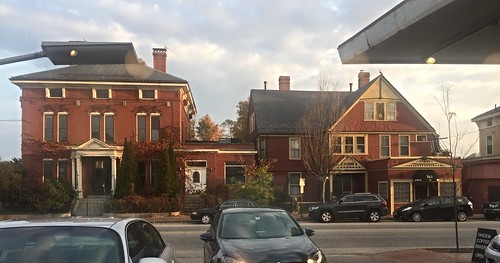 No way I’d be able to resist a few goodies.  Another fun thing for my bike basket.  Next time, I need to remember to turn the box around, so the wind doesn’t blow the flap open like it did on my way home.  My poor little cheddar-jalapeno biscuits were bouncing around in the open air until I stopped to rearrange the box. 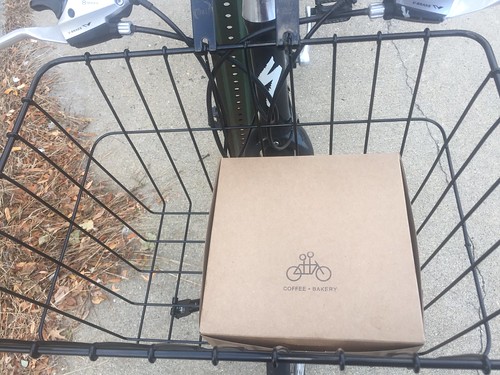 Aren’t you jealous of these beauties?  I highly recommend the cinnamon bun and the cheddar-jalapeno biscuits.  Plan to share though – they are so rich.  I think the cinnamon buns might have one stick of butter each.  Something new to me was the hazelnut blondie which was also very good. 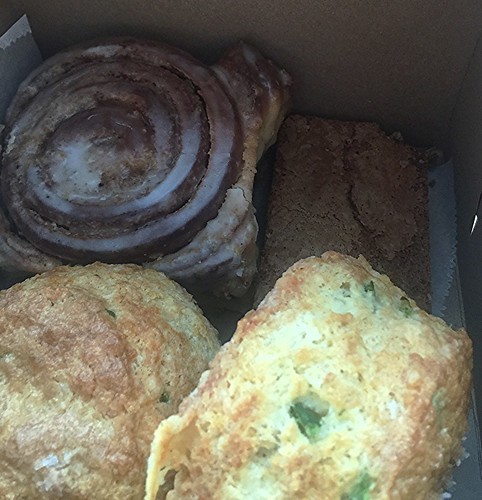