We haven’t done a breakfast run in a while.  It seems like we’re still recovering from the holidays, financially, and mostly – organizationally.

By New Year’s Day, I’m usually gung-ho to put away all the Christmas stuff, clean up my diet, and plunge back into a routine.  I was there this year, too. For my book club this month, we read The Life-Changing Magic of Tidying Up by Marie Kondo.  I went a little nuts applying that to my bedroom; got rid of a ton of clothes, cleaned out years worth of junk from my nightstand drawers, and applied the recommended clothing storage methods.  Diet-wise, I made some healthy bread and bagels, bought some almond butter, and vowed to eat more fruits and veggies.  With a marathon on the horizon, I planned to not going to miss a. single. day. of running.

All of a sudden though, the cold and dinginess of January just sapped my enthusiasm.  I’m not used to the folding method recommended by Marie Kondo, so it’s become too hard to put clothes away.  My bedroom is now worse than ever.  I did eat a banana and some cucumbers and tomatoes this week, so that’s something, but not the pristine diet I had in mind on New Year’s Day.  I missed a long run on Sunday partly because we couldn’t organize transportation for the kids who didn’t end up needed to be transported after all, and if I’m honest, a lot because I didn’t want to face the cold and the 20mph winds that day.

Don’t get me wrong, I’m not unhappy or depressed.  I’m just feeling like I don’t want to do anything but the bare minimum; run, work, eat, curl up under a blanket and watch TV.  I’ll crawl out sometime in May.

Actually, we had a 40+ degree yesterday!  I can already feel my attitude changing.  One of the things that makes me really grumpy is running on ice and slush and frozen chunks of snow.  It’s even worse when it starts to soften a bit – like running on sand – not the hard-packed stuff near the water, but the other stuff that makes you awkwardly slide all over the place.  We went for a run last night, and the messy trail I had struggled to run on just 48 hours earlier was almost completely clear.  I do worry about global warming, but I’m so excited that the temps are forecast to be above freezing for the next week or so.  It’s going to make running (and even just walking out of my house) so much easier when this mess melts.

The conditions of the streets and trails bother me so much more than the cold, but it’s amazing how much better it felt to run yesterday minus a few layers.

Lately, I’ve been feeling like the little brother in A Christmas Story.

I’m sorry if you were just looking for info on Lil’s and had to read through all this complaining to get this far.

After our lovely visit to Popovers on The Square in Portsmouth, we decided to go back to the French bakery to pick up a baguette to have with lunch or dinner later that day.  We had gone there the night before and split a macaron for dessert.  We did go back.  It was dark and barely looked open.  The romance and French accents (imagined by us?  faked by them?) of the night before were gone.  Worst of all, no baguettes.  What kind of French bakery has no baguettes?!

Problem quickly solved, however, when we remembered that Lil’s was just over the border in Kittery.  I was getting hungry again by then anyway and was hoping to sneak in one of their yummy crullers for the ride home.  We’d been there back in October after doing a little shopping at the outlet malls.  The Lil’s side of Kittery is totally different from the shopping side of Kittery.  Definitely worth a little (quick) detour.

Here was our spread from the first visit: 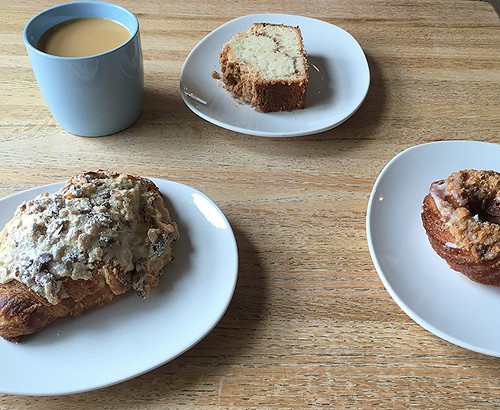 Coffee, traditional sour cream coffee cake, cruller with Butterfinger topping, and almond croissant.  It was all pretty rich and filling.  That day we got a baguette with some butter to eat on the way home.

This time, we didn’t stay, but I snapped a few shots while we got our baguette. 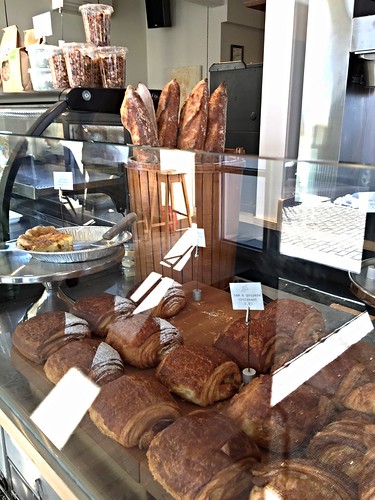 There are so many other things there that I’d like to try that I feel like I can’t really do a real review before I visit a few more times.  I’m guessing they make a mean breakfast sandwich (oh, just looked at the menu and saw that you can get one with candied bacon.  I feel like I need to go back.  NOW.), and it looks like they have some really good lunch offerings as well. 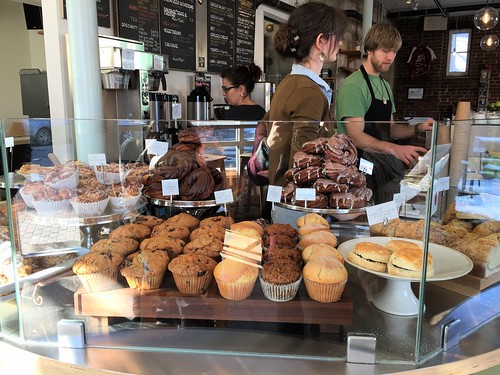 The place has a cool vibe with exposed brick, flour sacks on the ceiling, and a Vinyl Vault! 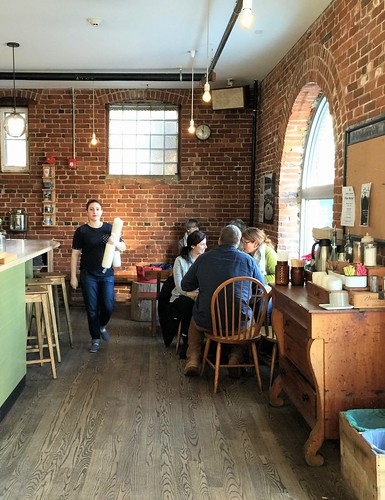 And I did get my cruller! 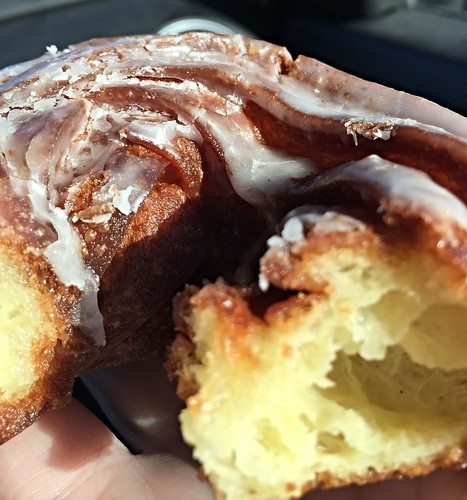 That’s the only thing I can honestly vouch for.  Recommendations:  Get one!

But . . . come with an empty stomach.  The egg-y interior of a cruller can make it seem deceptively light.  The crooks and crevices on the outside are perfect pockets for glaze and the oil from frying.  So delicious and so rich.  I could only eat half at a time.  Also, don’t bother with the ones with other toppings – that’s just over the top rich and takes away from the cruller’s perfect, straightforward simplicity.