Is there anything more exciting in a runner’s life than getting a new pair of shoes? 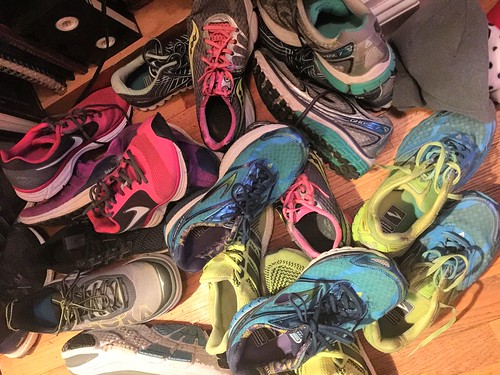 (Forgive the dark photos.  Not much daylight around these parts right now.)

Having some kind of newness really makes my run – especially when that newness is what’s supporting me through all this running.

There aren’t many things where I won’t try to find a cheaper option, but with running shoes, I don’t bat an eye at price.  I justify by calculating how much it will cost per mile.  I have 654.52 miles (approximately.  Did I mention I’m a nerd about stats?) on my current pair of shoes.  They cost me $180, so that’s about 28 cents per mile.  Actually, I might be kind of upset to drop a quarter every mile I ran (that would pay for a lot of my bad diet Pepsi habit), but mostly, it puts it into good perspective for me.

My last two pairs of running shoes were the Adidas Ultra Boost (first black, ugh, then bright pink/purple, better).  And if you must know, before that it was Asics, Nike, Brooks Ghost 7, Brooks Glycerin, Brooks Ghost 7, Brooks Ghost 7 (did I mention I’m a nerd about stats?).  You’d think I might like to keep things simple and stick with the same thing over and over again, but that would eliminate that newness factor that I love.  I at least need a different color!

So, after Christmas, Amazon credit was plentiful, cash – not so much.  As I was approaching 600 miles on my current shoes, I figured I’d better do something, so I ordered these beauties.

Loved the gray color.  Well, it turns out they weren’t the exact same as my original Ultras.  On top of that, I accidentally ordered a half size down, so back to Amazon they went.

Which worked out pretty well, since I was getting some pressure to switch brands.  Mike just bought his first Hoka One’s.  After his first run in them, he urgently texted me to say I should drop everything and order the Hoka’s.  He was in love.

After all that returning and mind-changing, pay day finally rolled around again, so I thought I’d pick up a pair at our favorite local running store, so I could at least try them on.  We left a little early for our running group – also put on through Fleet Feet Sports – so I could try them on and presumably buy them.  It was complete chaos in the store with the running group there.  Craft was also doing a demo night (tried a shirt – nice – but not my tried and true wool).  And there was also some kind of spin class going on.  I still made the poor sales guy take me through the whole thing.  I tried on some new Saucony’s, the Hoka’s, and the same Ultra variation I had ordered from Amazon.  Every time I try on running shoes, I hope for some kind of sign – I don’t know, angels singing, rays of light, something – that these are the shoes for me.  But they all feel great, so I just never know.  I decided to go with the Hoka’s, since Mike was so excited about them.

As I got ready to pay, the nice sales guy said I could use them on my run with the training group and pay for them after if I liked them.  Or not if I didn’t.  Our coaches had a nasty hill workout in mind for us, but I actually felt great, and the shoes felt great, but . . .

I had a few little twinges of tight calves and tight arches.  Not a big deal, and I figured I would get used to it.  But as I was running, I got to thinking that at my last marathon, I had no calf problems at all while in my first three, the only major pain I had, especially in the last 6.2 miles, was in my calves.  Before that I’d never even given that any thought, or if I had, maybe I just figured I was in better shape.  As much as I’d like to continue to think that, maybe, just maybe, it was the shoes.  First three marathons – Brooks Ghost 7, last marathon – Adidas Ultra Boost.  That was it, finally, some kind of solid evidence (maybe) for a decision.  (I’ll let you know after this marathon.)  They were very gracious when I got back to Fleet Feet and told them I wouldn’t be buying the Hoka’s after all.  (I sure hope they can still sell them to someone else – I assume they have some kind of strategy for that.)  I wanted to get my Ultra’s right then and there, but they only had black (a girl’s gotta be a bit girly) and were still very busy and about to close. 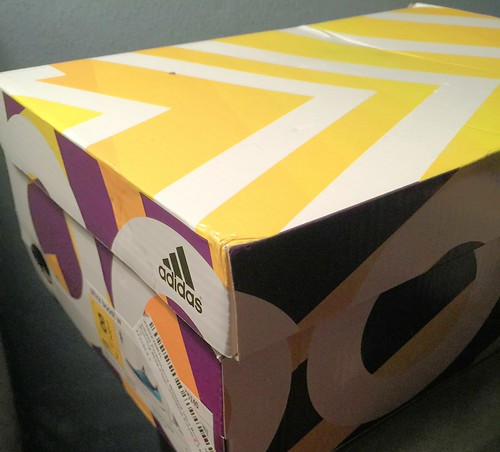 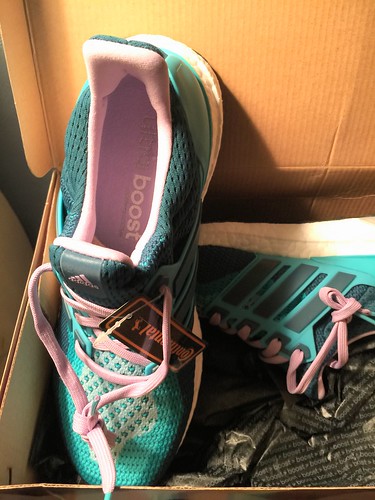 Here’s another shot for good measure. 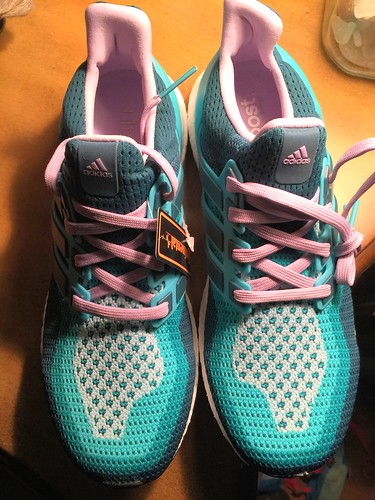 I only have about 15 or so miles on them.  Two recent snow storms and tapering for Austin have completely sapped my motivation.  I’m still planning to wear them for the marathon.  Is that crazy?

Since then, (like almost the very next day), Adidas has announced a new shoe which seems similar to the Ultra’s but specifically for women.  Maybe my next pair.

Off to pack for Austin.  Woo hoo!  And help my daughter with some kind of crazy school project. 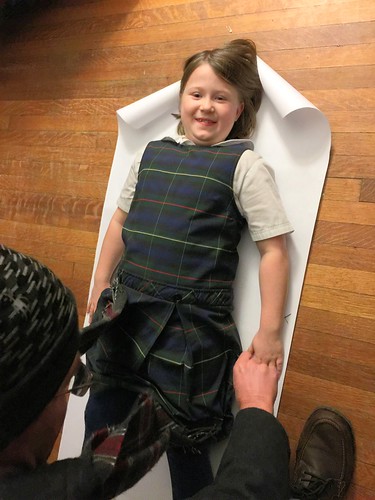 Mike is tracing Addie, so she can turn herself into a character for her book report.  Somehow she ended up with what he calls “Grasshopper Legs”, so we need to redo the bottom half.

She has way too much homework for a third grader.  It’s ridiculous and frustrating, but that’s a post for another day.  Anyone else in the same boat?