Great name for a race, huh?  This one is becoming a tradition for us.  It’s a New Year’s Day race which seems like the perfect way to kick off the year.  We discovered it last year when we were looking for a 10K on that day.  It was going to be Mike’s first one.  There were a lot of 5K’s in the area but only a few 10K’s;  this Hangover Classic in Salisbury, MA and one in Lowell.  I’m not sure how we decided on the Hangover Classic whether it was the name, the free beer, or that it’s a bit shorter drive.  In any case, we had a great time in 2015 and decided to repeat this year. 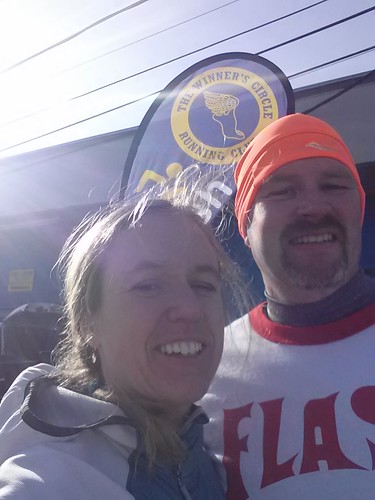 The race starts around 11:30, so we had plenty of time to get to Salisbury from Portland and were even able to sleep in a bit after seeing in the New Year the night before.  We had a glass or two of champagne but didn’t party too hard, so for us the race was Hangover Classic in name only.

There is also a 5K option which had more runners.  There’s also the option to do a quick plunge in the ocean from the expansive (and wintertime-empty) Salisbury Beach (there were a few crazy surfers out).  Mike and I didn’t go for that option, but it was interesting to watch the people who did.

The course is super flat, so it’s great for a PR.  Mike and I both managed to hit one this year.  In spite of that, I still came in 5th for my age group which is that same as last year.  I wanted some “hardware” even if just age group hardware.  They do give out nice glasses to the top 40 male and female finishers.  I was able to snag a glass, so that was cool. 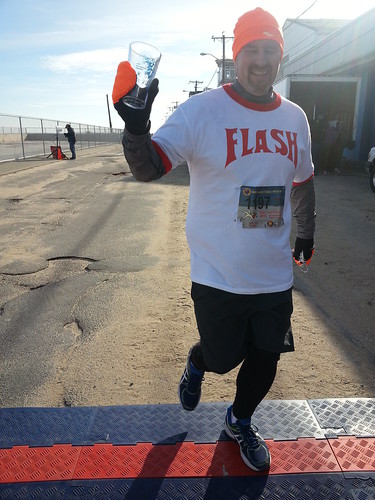 There’s a great after party at The Carousel Lounge with free beer and pizza and wall to wall people.  It seemed like everyone there knew everyone else which gave it a great vibe although we didn’t know a single soul.

My favorite part of the race was when I passed a guy about 0.1 miles from the finish, and he shouted out encouraging words to me.  I always wish I would think to do things like that in a race.

We enjoyed our post race, post PR high and after consuming our free beer and pizza made our way to Portsmouth, NH where we had booked a hotel for the night and had a great time restaurant hopping for both dinner and breakfast the next day.  More on that another day.