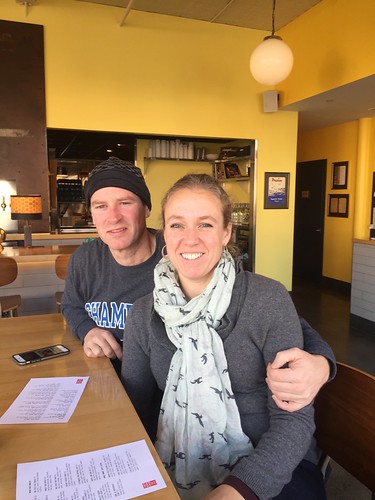 Once again, our daughters’ dance practice conflicted with our breakfast run desires, so we had to adapt.  Years ago, I had investigated places to eat lunch in Portland on the weekend and came up kind of short.  Flatbreads, which I like, was available and that seemed to be about it.  Fast forward 10 or so years later, and the options were happily plentiful.  For many of Portland’s hip restaurants, lunch is a great option.  It’s usually a bit less expensive and definitely less crowded than the dinner scene.

We got up later than we had planned (again, up with the sun did not happen) but managed to squeeze in a run before having to drop the girls off at dance.  We were then left with each other, one son, one cat, and one dog.  Having burned some calories and not eaten breakfast, we, very uncooly, searched for a place that opened at 11:00, the earliest honorable time to eat lunch (and/or have a non-breakfast-related breakfast adult beverage).  Luckily, most places we looked into did open at 11:00.  We’d been wanting to try The Honey Paw for awhile, so we decided on that.  Not wanting to leave our son out, we invited him to come along, and he was game (although I’m still harassing him, with little success, to write a guest blog post on his thoughts of the restaurant).

We ended up having a GREAT time being tourists in our home town.  The Honey Paw was awesome.  Although, I must say, I’m a little worried about writing this review, since I’m DEFINITELY not a professional, and there was some controversy about that fairly recently.  We were the first ones to arrive at the restaurant, so, obviously, we had our choice of seating which is actually quite interesting at The Honey Paw.  You have your choice of the bar, 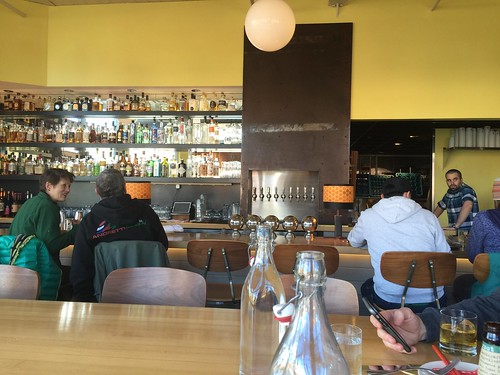 something like a bar along the window facing Middle Street, 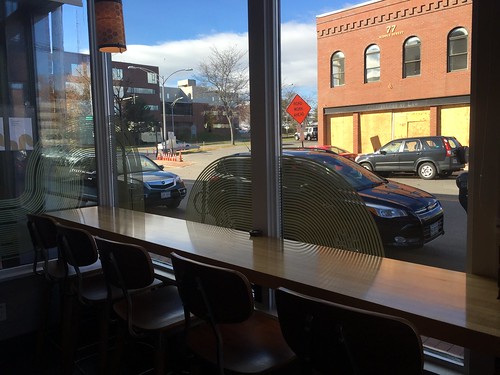 and a ginormous table in the middle of the restaurant, so definitely a family-style dining experience provided you’re not the only family there. 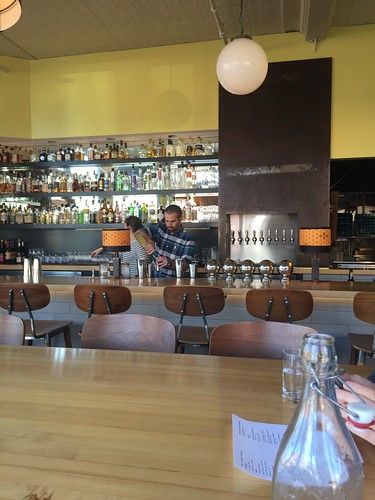 Of course, we ordered a drink right away.  I was impressed that the cool, hip-looking (probably world-reknowned) bartender started mixing our drinks before the waitress even finished taking our orders.  (We were the only ones in there, and I know he overheard, but still, cool.)  I ordered something called the “Lapsang Fizz”.  (Have I mentioned that I like my bubbles?)  It had bourbon, lemon, lapsang souchong (which I assume is some kind of tea), egg white, and soda.  I’ve been hearing about egg whites in cocktails for a while.  I was intrigued and wanted to try it.  It was delicious, but the fizzy cocktails are never as fizzy as I would like.  Mike ordered a Strong Paw as I predicted he would, but I’ll let him blog about that, and Frank ordered a fancy root beer. 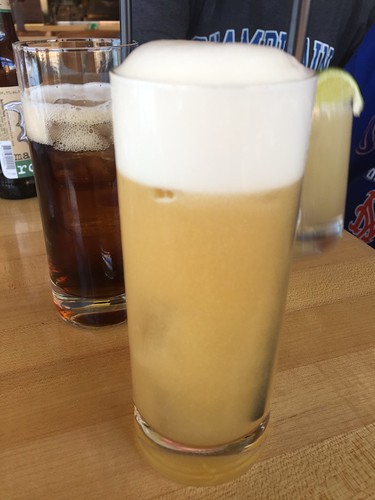 Once we had the drinks figured out, lunch was a bit more challenging.  I had read other reviews that recommended the brussels sprouts, so that was a no-brainer.  They were delicious. 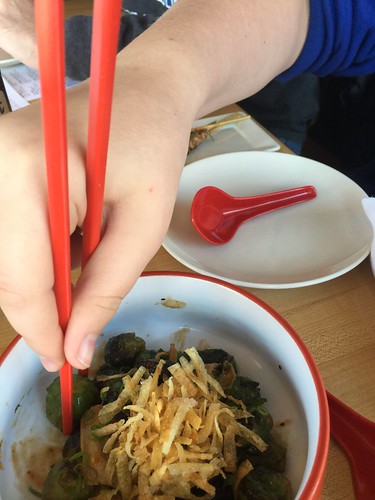 I loved the shredded potato-chip like topping, but I have to say Miyake still has the best brussels sprouts I’ve ever had.  We ordered a few other appetizers; the duck skewers which were so amazing, we had to order another plate of them, and the fry bread which was actually my favorite and brought me back to our decades-ago visit to The Four Corners, but gourmet-ized. 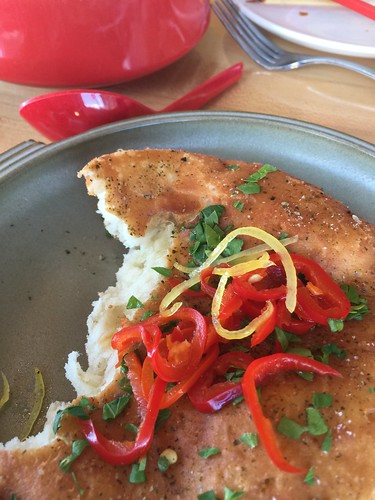 We were getting a bit full by then but still wanted to try some of the entrees.  Mike and I struggled to decide between the Wok Fried Rice Noodle and the Vietnamese Pork Meatball Soup to share.  Frank struggled, in general, with the unusual-ness of the menu.  He’s an adventuresome eater (he loved the duck), but this was a bit extreme for him.  I tried to sell him on the Banh Mi special, but he was hesitant about its Chicken Liver Mousse condiment.  He settled on the Vietnamese Masa Corn Crepe.

I loved our Wok Fried Rice Noodle.  I’m not usually a big shellfish fan, but the mussels in it were delicious and reminded me more of nice, tender calamari.  Oh shoot, now I’m reminded that there was squid as well, maybe it was actually squid I was eating, no I’m sure it was a mussel.  The squid was good, too.  Honestly, I wish I remembered the sausage part better, but the noodles themselves were AMAZING, nice and broad with such a wonderful, savory flavor. 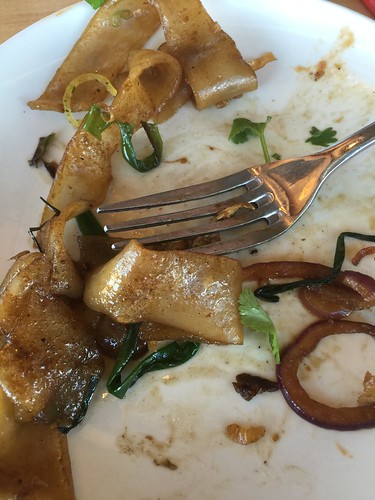 Frank’s crepe, though, was the high point of the meal for me.  The crispy, crunchy, melt-in-your-mouth crepe was an orgasmic experience.  That would have been enough in itself, but the melty, farm butter put it over the edge.  The crepe itself was so good that I really didn’t even care about what was inside it.  That said, the smoked chicken and piccalilli filling would have been delicious as a dish on its own.  When we go back, this will be what I order, without hesitation.  It was a special, so I hope it’s available. 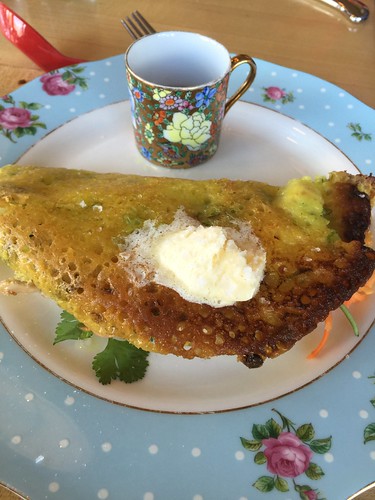 We don’t usually order dessert.  I mean, it really doesn’t make sense for breakfast, but I saw the dessert menu first, and since, Mike and I were splitting a meal, I though we might actually have room.  I’m not such a big ice cream fan.  I know, I’m weird.  The walnut cake, however, was calling me.  Anything that has an ingredient called “white chocolate butter cream” is not to be missed.  And believe me, that was not a misnomer.  I was impressed that they didn’t even bother to call it frosting.  I mean is frosting really anything but butter and sugar?  This was more butter than sugar, and I liked that they didn’t bother to try to hide that.  You might think that would be way too rich in a cake, but the blueberry, pear jam cut the richness perfectly.  So, so good!  I would go back and just get that because after the delicious meal and splitting it three ways, we still couldn’t eat the whole thing.  Why, oh why, didn’t I bring the leftovers home?

The food was so good, that it could have been in a mobile home, and it wouldn’t have mattered, but the atmosphere of the restaurant was really great, too.  The sink in the bathroom was the coolest the boys had ever seen.  The interior of the restaurant was bright and cheerful.  It did begin to fill up as we ate, but being stoic, shy New Englanders, no-one opted to sit close to one another.  I could see it getting friendlier later in the evening, later in the drinking.  A very cool feature is that they had this cool D.J.-type booth, so the background music was all vinyl.  I’ve since learned that they have some events where that is featured. 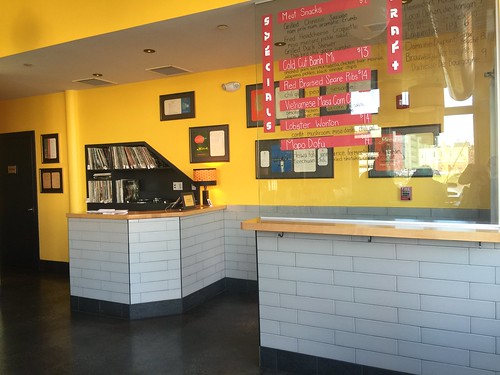 We had a super fun time at the restaurant.  It just had such a nice, relaxed aura that we just really enjoyed ourselves.  Mike and Frank did some kind of Star Wars trivia game that was, of course, above me. 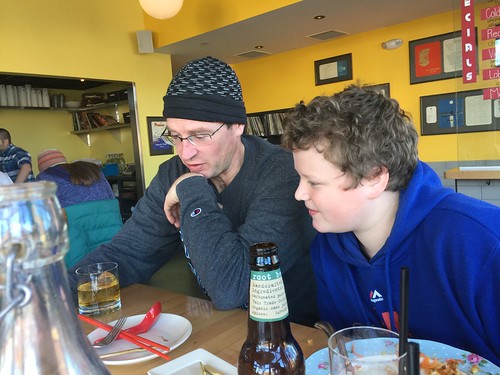 Part of our plan of the day was to visit a local shop called Nomad’s.  I had run by there recently and noticed that they had Icebreaker, Ibex, and Smartwool in their window.  As it gets colder here, we’re wanting to wrap ourselves in more and more wool, so I was curious to see what this place had.  They really had a great selection including our favorite wool socks, Darn Tough, but it was a bit pricier than I’ve seen on-line.  Mike did buy a cool Ibex hat and some Outdoor Research gloves.  I had the same version last year in mittens which I heartbreakingly lost at a comedy show.  They didn’t have any Icebreaker base layer shirts in my size, so the saleslady steered me toward Ibex which did look great but were surprisingly a lot more expensive.  I opted to buy one on E-bay instead.

After that, we swung buy LeRoux Kitchen (which I remember being Whip & Spoon, do you?) because I had seen on Facebook that they were doing a Thanksgiving meal tasting.  It was beyond our expectations.  We could have skipped lunch and had this one for free.  The was a generous taste of tender turkey, mashed potatoes (that weren’t as good as Mike’s), stuffing, a nice Kale salad, and an interesting tomato thing.  To top that off, there was a wine tasting.  They had a bubbly rose which I loved and bought to have on our Thanksgiving.

Finally, we topped off the day with a stop to Gorgeous Gelato.  We normally hit up Gelato Fiasco but wanted to try out their across-the-street competitor.  As I said, I’m not a big ice-cream fan, so I’m not sure I can make a fair comparison, but I do think Fiasco has more variety.  In any case, Gorgeous was delicious, and it was warm and cozy in their home while Mike and Frank polished off some scoops. 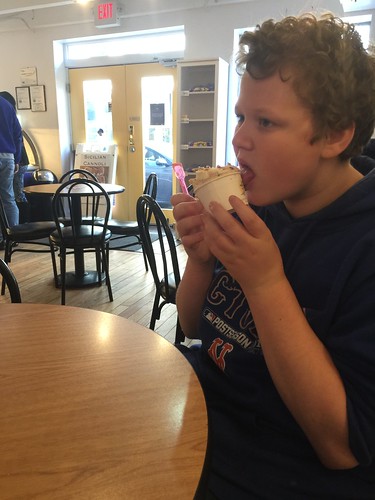 We finished up our Portland adventure just in time to pick the girls up for dance.

Thanks for reading.  Happy running and dancing.