On Sunday night, I knew that I was going to be close, so I added an extra mile or two to my Monday and Tuesday runs, so I’d be sure to hit the goal on Tuesday.  Tuesday is one of my favorite nights of the week.  For some lucky reason, we rarely have kid taxi duty on that night, but, best of all, the next day is my day off of running.  I love running, but days off are glorious!  It didn’t take much to convince Mike we should go out and celebrate.

First we had to get through our younger son, Frank’s, first ever high school parent-teacher conference.  He had texted me earlier in the day to see if we could have pizza for dinner, so I thought we could combine my celebration with a post-conference pizza dinner (as long as we were still speaking after the conference, of course – my older son legendarily got kicked out of his own conference once).  I immediately thought of Bonobo, since I’ve been hooked on their pizza since our Happy Hour Run there a few weeks ago (and my subsequent, covert takeout order there one night when Addie had soccer practice nearby, and Mike wasn’t home).

We got through the conference without incident and actually got some nice compliments for Frank then headed to Bonobo.  Having to park was kind of annoying, since we usually don’t have the burden of the car.  As we were walking to the restaurant, it came up that it wasn’t actually Frank who had texted wanting pizza but our older daughter using his phone.  (Smart of him not to mention it until we were almost there.)  We got kind of a chuckle out of that.

Bonobo doesn’t seem to get as much press as some of the other pizza places in town.  I actually quite like those places, so, originally, I was a bit reluctant to waste my pizza-eating budget on a different place, but I was hooked – almost the minute we walked in that first time.

The atmosphere is welcoming and bright (in a cozy, Christmas-y kind of way – not in a spartan kind of way), and it just looks like everyone is having a good time, relaxing and lingering over their pizzas and wine or beer.  (Speaking about cozy, Christmas-y, I just recently read about the concept of koselig – check it out – very interesting and appealing.)  There are little white Christmas lights strung back and forth across the tin ceiling, a nice bar, and banquettes along the window.  It might just be where it’s located, in the West End, but I got a real neighborhood-restaurant kind of vibe from it – in a good way.

The first time we went we sat at the bar which was very pleasant. 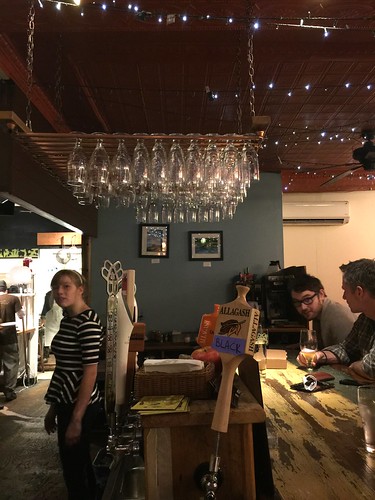 When we went with Frank this time, we sat at one of the tables with the banquettes.  A very nice couple who were sitting at a table for four offered to switch with us when they saw three of us trying to squeeze into a table for two.  Even though there were people seated on either side of us, it seemed like we had our own nice, private space and had a fun conversation.  (Surprisingly, our kids are really good about not pulling their phones out while we’re eating – it’s not like we set a good example.) 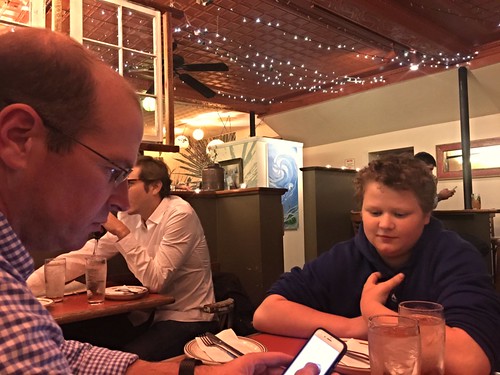 Mike is kind of a pizza purist, and the first time we went he wanted a Margherita pizza.  I like those just fine, and I do agree that a sparsely-topped pizza lets you focus on all the important, simple, components of a pizza; the crust, the sauce (actually I guess those are the only two – doesn’t seem like you can really screw up the cheese part).  But I like my pizza to be more interesting.  Sometimes I can just go with the flow, but I was already cranky that night.  On our run just before, Mike was weaving in and out of traffic like a madman, in the dark, so I was a little tense after taking my life in my legs and traipsing after him.  We decided to compromise on a sausage pizza, but I didn’t really want that either.  We couldn’t justify ordering two pizzas.  Finally, we realized we could order half and half, and the night was saved!  (Glass of wine helped, too.) 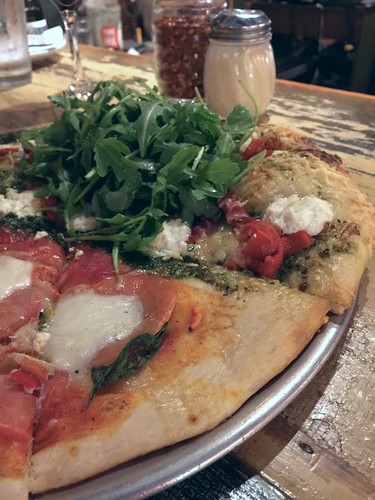 The next time I went, I ordered takeout while Addie was at her last soccer practice, I got a “gruyere” for myself and whichever kids dared to try it and a cheese for those who didn’t.  The bad thing about take out is that it was kind of cold by the time I did what seemed like a thousand other errands and got home.  It was still really delicious though.  The nuttiness of the gruyere really came through, and I loved it.  The potatoes were purple which was a fun touch.

I liked that one so much that that’s what I ordered when we went to celebrate my 2015.  Mike took advantage of the Tuesday (and Wednesday) night special of a $7 cheese pizza, and Frank opted to make the other half of mine a “caspian” (roasted chicken, smoked tomatoes, garlic & basil, mozz, parm & red sauce).  I tried some of his, and it was good but not enough to make me stray from my two new faves. 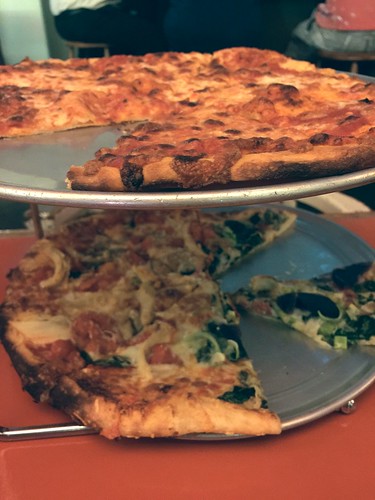 If you’re in the market for a good pizza, definitely give Bonobo a try.