This past weekend we had one of our best runs ever in Camden and Rockport.  In case you don’t follow every. single. post.  I blogged about it here.  It was amazing how quickly the miles ticked away as we were reminiscing about our childhoods there.  I listed a lot of those in my last post, so I won’t bore you with that.

(Well, wait, I can’t help myself – here are a few more that I remembered remembering after that last post; the fabric store where my mom worked (who knew I would end up loving fabric so much), The Sail Loft where my mom also worked and brought home butter mints in her pocket which I stole (maybe they were meant for me), the soccer fields where I first played which were close to the parking lot where I  very suavely asked Mike for my first ride in his car, the room where we first learned to type, my first elementary school (K-2) where I felt like a loser for not being able to figure out right and left or how to tie my shoes, my second elementary school where I also played soccer later and where Mike played Babe Ruth baseball and where I remember watching my younger sister play field hockey and which seems to be, other than the fields, completely obliterated from this Earth.  Holy run-on sentence.  Mrs. Crockett would be appalled.)

So, back to Boynton McKay.  I remember (vaguely) going there with my Mom.  I can picture stuff along the side walls and a giant fixture in the middle that mostly had greeting cards on either side.  I think you could get root beer floats, too which we may have done a time or two.  I can’t really picture it accurately though, and can’t seem to (quickly) find any old images of the interior.  Like I said in my last post, it was featured in Olive Kitteridge, so watch that if you want to picture it.  What I do remember is walking into town with my mom and sister.  We had one of those cool (probably not at all safe) strollers where my sister (younger) could ride in the stroller part, and I could stand on the back.  It was yellow-ish with brown flowers.  About at 70’s as you could get.  My Adelle-Davis-worshipper-of-a-mom made us eat mostly health food which by today’s standards is Guantanamo-Bay-Style torture (gluten-free’s got nothing on this).  Think bread that no amount of water (or Kombucha) will moisten and peanut butter that’s barely more than peanuts littered across a 100% whole wheat landscape.  Why, oh why, would anyone never trade me their fluffernutter sandwich?  We must  have worn her down though because on that walk from our rented house Sea Street to downtown (what a great location near the ocean and my best friend Kari), we, every once in awhile got to stop at Nash’s which was across the street from Boynton McKay.  Every time, without fail, I got a hostess cupcake – well they came two to a package – pretty much the same as today.  I don’t know if you can even still get them, I’ve outgrown my desire for them, but I got the orange-ish ones that I think were vanilla because I was somehow convinced I was allergic to chocolate.  (I’m over that now, too.)

Holy Cow, do I ever digress???

So today, Boynton McKay is much hipper, like Brooklyn-hip (or is that so far in, it’s out?).  After having read a few reviews, I was worried that if we didn’t get there at precisely the opening hour of 7:00 a.m., we’d never get a seat.  After our running tour through Camden and Rockport, I think we ended up there around nine.  Business was booming, but there were at least two open tables, one of which we competitively snagged (okay probably just me, Mike is much more laid back).

I really enjoyed the private feeling of the tall booths.  I got the same feeling at Artemisia.  It is just somehow more relaxing to my introverted self. 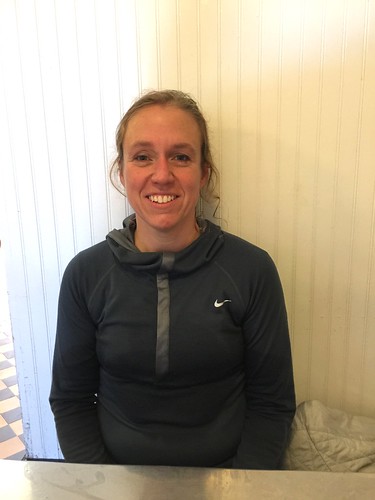 Honestly, I was not crazy about the go-to-the-counter ordering system.  I really prefer to have someone come and wait on me.  It sounds snobby, and maybe it is, but I like to have a lot of time to peruse the menu, and going up to the counter makes me feel too much pressure to decide quickly.  And honestly, after a long run, I feel like I deserve to be waited on.

That said, the Boynton McKay staff was very patient with us when we waffled about our choices (again with the breakfast puns) and asked lots of questions.  (Yes, you can order breakfast OR lunch any time of day – which frankly just made the decisions harder.)  We were a bit puzzled by the sword-bearing, mustachioed woman behind the counter (but we are accepting of hipster-dom) until we remembered it was Halloween.

I was really tempted by the lunch-time quesadilla with black beans and avocado but decided to be disciplined and stick with the breakfast options.  I didn’t wander far afield and ordered the Huevos Rancheros.  I’ve been kind of on a Mexican breakfast kick. 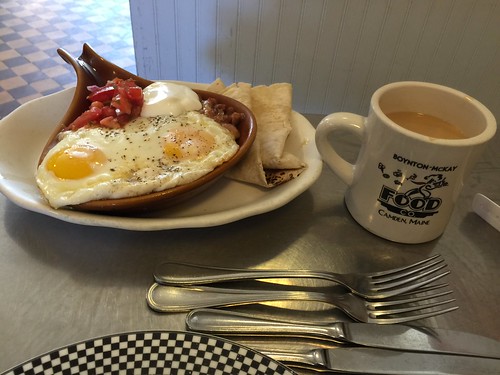 It was really delicious.  My best bite was one where the cheese had burned onto the dish to the point where I thought there was a crispy corn tortilla underneath.  Every other bite was delicious as well.  There was a yummy, warm, giant flour tortilla (which I much prefer to the healthier corn variation – I mean we’d just run ten miles – who cares?!).  We debated whether it was homemade or not.  It was at least warmed and grilled there, and delicious.  The combination of that and the hot beans, eggs, and cheese, and the cool tomato salsa was orgasmic.  My only complaint was that there wasn’t more salsa.  In hindsight, I suppose I could have asked for more.

Also, in hindsight, I wished I’d ordered a side of home fries.  That’s my favorite thing about breakfast, and I order them almost everywhere I go.  I must have been overwhelmed beyond my senses by being “back home”.  That’s what happens when I don’t have enough time to pour over the menu.  I did have a seat with a nice view of the menu and thought that next time I would order the home fries with chorizo and other nacho-esque toppings. 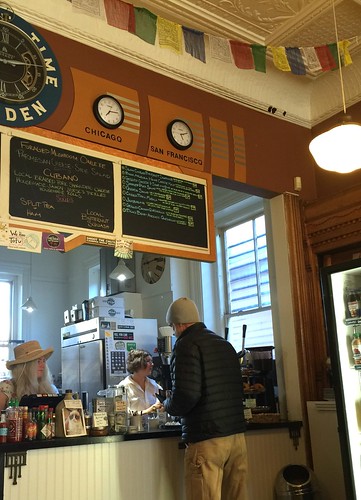 There was a lot going on that day, and everyone else seemed to belong but us.  I think that mostly a result of us having previously been part of that community and now not having any clue about it.  They were giving away cute little ghost like meringues to anyone in costume. Honestly, Mike really should have qualified in his Sprockets outfit. 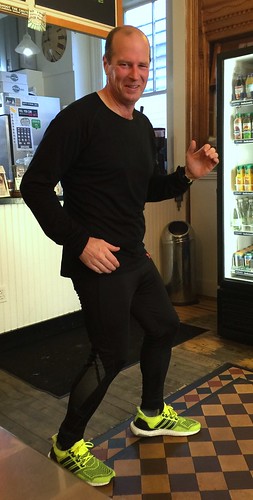 I was honestly surprised how uninhibited Mike was in the restaurant, but you should have seen him at home.  Oh wait, you can . . . 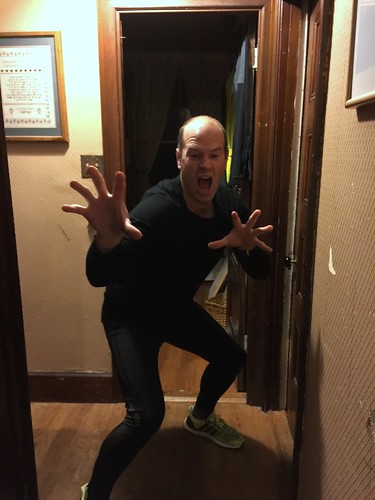 There was a nice help-yourself coffee area (for us normal coffee drinkers anyway, it doesn’t apply to fancy-schmancy cappuchino drinkers) which also had water, Kombucha, etc.  The water had a green tinge and was advertised as local Absinthe.  I thought Absinthe was a previously-illegal-to-the-US-beverage for it’s murderous properties, so I was surprised that they were giving it away for free.  Finally, Mike was convinced to try some.  It pretty much tasted like water.  At that point, we finally realized, it was a Halloween joke.  Duuh.  Very funny, Boynton McKay.

Mike had the French Toast which I had to sample, of course.  It was delicious, but I’ll let him do his own blog post. 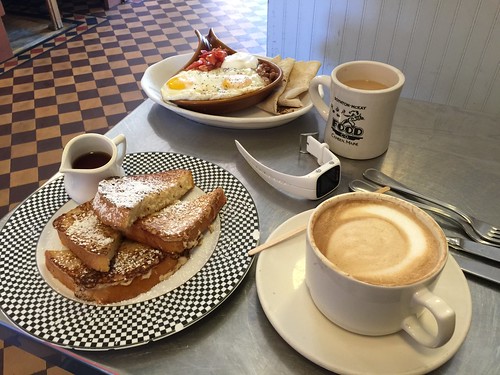 All in all, we will definitely be back to Boynton McKay.  We enjoyed it thoroughly.  The only improvements I would make are; real adult beverages (absinthe aside), more salsa on the Heuvos, and wait service while ordering.  The last I could certainly live without, since, maybe that’s part of the appeal of the place, and like I said, the people were wonderful and didn’t rush us at all.

Definitely go to Camden if you have the chance.  I think leaf season has pretty much passed, but at least the leaves are still on the trees (even though mostly brown), so you might be able to eek out this weekend or the next.  Beyond that, you’ll have to appreciate winter or wait until July.  The Camden Snow Bowl is fun if you’re a skier.

Thanks for reading.  And eating.  Happy running.  And thanks to my brother, Simon, for the recommendation.