We had a such a great breakfast run this weekend that I can’t possibly limit it to one post.  I’ll talk about the breakfast part later.  Portland is a beautiful place to run, and we really love living here, but every once in a while, it’s nice to run somewhere else.  (I haven’t had a chance yet, but I want to create a map with a pin for every state, city, town where I’ve run – and maybe a different color pin where I’ve raced.)

All year, we’d seriously been considering doing this 6.66 mile race in Salem, MA, but it just seemed like too much to pull together in the end.  I’m not sure what got the idea into our heads, but we decided to drive up to Camden instead.  No race, just running and eating.  I grew up in Camden, and Mike grew up in Rockport, so it was going to be pretty cool to run by and possibly eat at our old haunts.  I wanted to eat at The Rockport Corner Shop, but alas, it’s not there anymore (OMG, who says “alas”?!  I should probably mention I’m having a glass of red wine while I write this post.)

I consulted my brother who has been in the area most recently, and he recommended Boynton McKay.  It used to be a drug store.  I remember shopping for greeting cards there with my mom when I was pretty young.  Maybe Addie’s age (8).  If you’ve seen Olive Kitteridge, it’s the drug store where the husband works.  That’s more how I remember it, but now it’s a very hip restaurant.  But, again, that’s a blog post for another day.

Anyway, both our families have moved away from the area, and apparently we didn’t make strong enough connections in high school to go back and visit classmates.  Neither of us could remember when we were last there, but our oldest son was baptized there in 1996 or so.  I think we may have gone back a bit later to help my parents move away, but that wouldn’t have been long after.  Let’s say, it’s been at least 15 years.

We’d made the plan about a week ago, so I thought about it off and on all week.  I wasn’t sure how I’d feel; emotional, maybe? or disappointed in the changes?  The day finally arrived, and since we’ve been busy watching the Mets in the World Series, it was a late Friday night.  For some reason that I still don’t understand, Mike wanted to set out on the 90 minute drive super early.  He said, “4:00 a.m., no bellyaching”.  I’m pretty much a morning person, so I was okay with that.  I woke up in the middle of the night as I often do, and realized that all of our running clothes were in the washing machine.  Waking up in the middle of the night and actually getting up are completely different things, but I managed to drag myself out of bed to put the laundry in the dryer.  Waking Mike up wasn’t quite as easy, but we did manage to leave the house by around 5:30.  It really stresses me out to be late, so I was worried Boynton McKay would be jam packed by the time we finished running, but I figured we’d go with one thing at a time.

After stopping in Wiscasset for gas and people-hydration, we arrived in Camden around 7:15 or so.  At that hour, we had no problem finding parking across from Boynton McKay.  We ignored the 2 hour parking signs assuming we’d be done running by then and would move the car if need be, but really who was going to be marking tires at that time of year at that time of day?  But that did trigger my first memory of the day of a uniformed woman walking through town drawing yellow chalk marks on cars’ tires.

Mike was shooting for about 10 miles.  I didn’t really care what we did.  (Injured, more about that another day, too.)  Then again, I don’t like not having a plan, so I sketched out a rudimentary route that I figured would at least give us 6 miles or so.  Here’s what we ended up doing:

It was absolutely gorgeous, 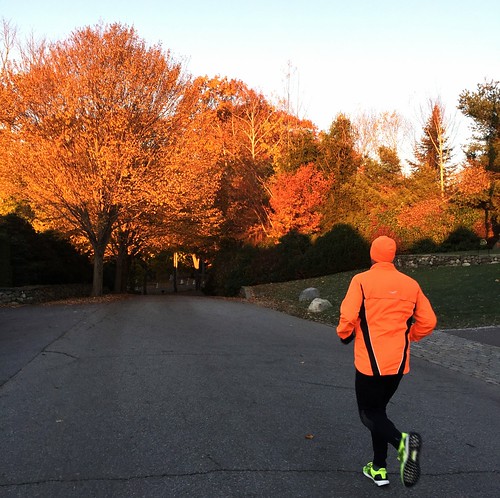 (It’s moose-huntin’ season here, so it was handy that Mike had on his blaze orange.)
and brought back so many unexpected memories as we went along.  Two of my first jobs in retail (motivation for college), my dad’s first office when he started his cheese company (creme fraiche first), where my bus stopped to pick up my friend, Joy Anderson, (and other kids who seemed weird at the time and others that I now know were bullied – the boy with the girlish name, for example), the park I ran away to when I was mad at my parents, the house I fantasized about living in as my bus drove by, 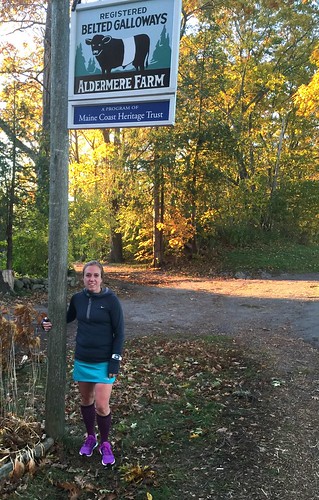 the oreo cows that are so sentimental that my dad now owns six or so, 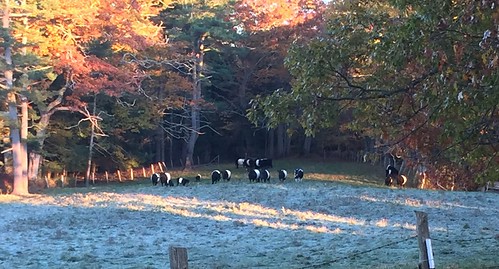 (those are the ones in Rockport, but here’s a close up of one of my Dad’s:) 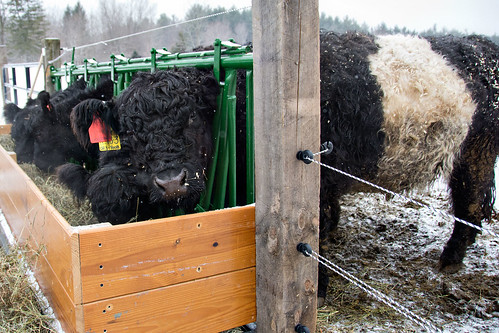 (That’s them on a colder day last winter. The one in the front is called “Two Tags”. She’s very naughty. I like to call her, “Lunch”.)
and of course, their home, 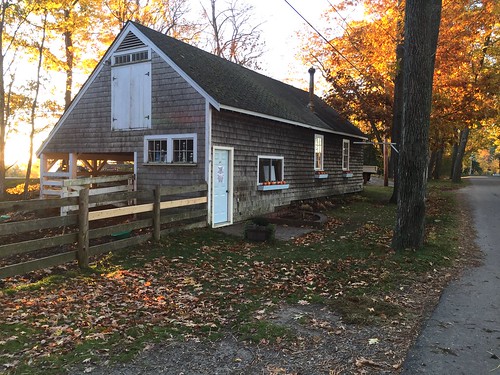 (Mike once put a Bangor Daily News mailbox in the middle of their field.  I suppose they wanted to keep up with current events.  As mischievous as that seems, doesn’t that seem better than playing Halo?)

the place where Mike played golf, 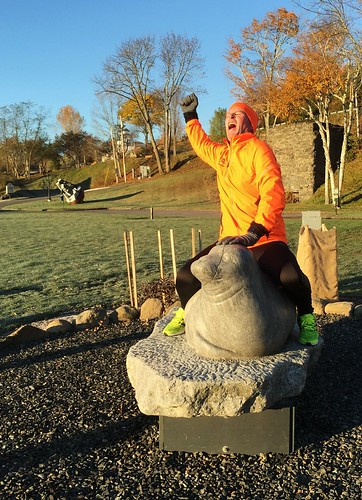 (some of us were being a bit sillier than others) 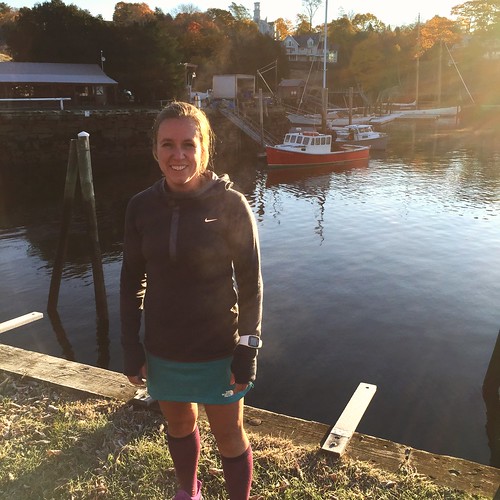 the white arch between Rockport and Camden that we remembered getting hit by a truck and requiring major fundraisers to rebuild, 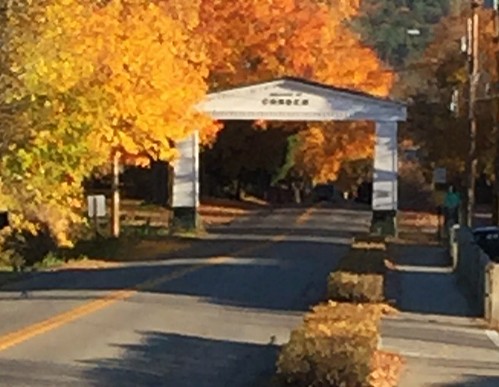 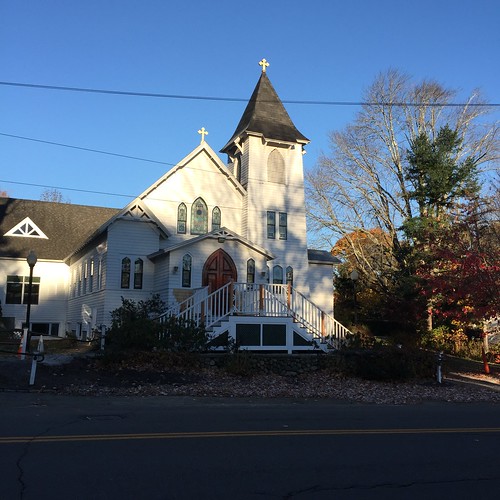 and where we later got married, 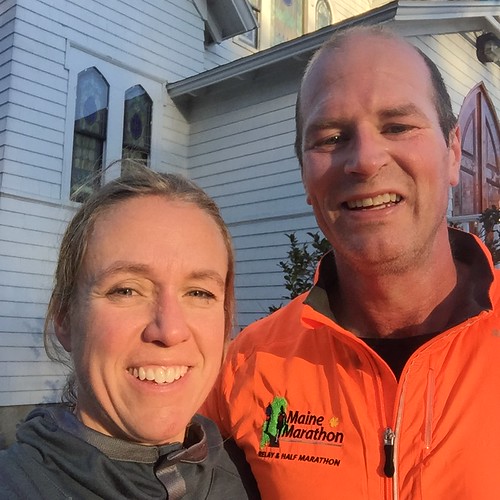 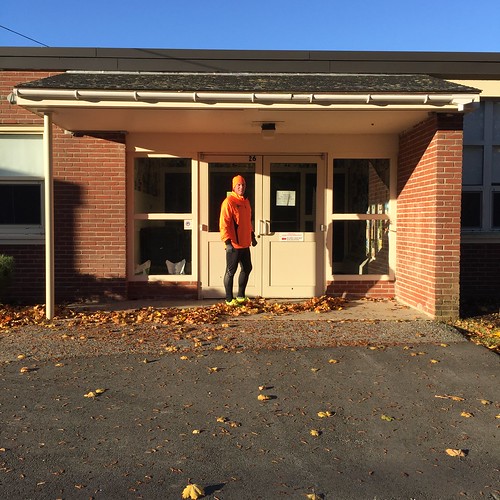 the car wash that Mike remembered and I didn’t that was owned by one of our schoolmates families, where we used to swim in the river,

(which is actually for sale – check it out here.  We were tempted for a second.)
the park where we used to hang out and counted our coins to try to save up enough money for a tent to go camping, 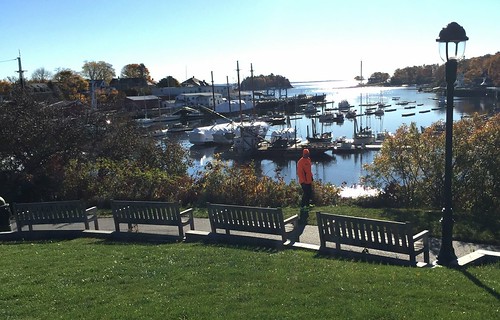 the waterfall that housed lots of ducks that we used to feed. 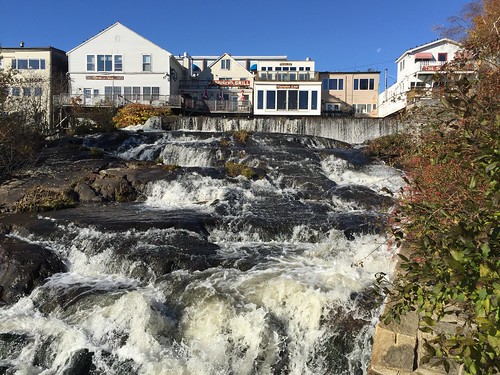 (And also the back of the deli where I used to get sandwiches for my lunch break at work and was owned by our friends’ family.)

We had a lovely breakfast then hit up Maine Sport where my sister used to work.  It’s like a mini L.L. Bean.  We spent quite a bit of time looking at running gear and feeding Mike’s new love of merino wool.  I’ll let him blog about it, but he just might have purchased wool underwear!

After that, we hit up The Market Basket which was probably my first ever experience with gourmet food.  As you might have surmised, I do really like to eat. Growing up in Maine in the 80’s (okay fine, and 70’s), I’m not sure there really was the concept of French Bread, so The Market Basket provided me with my first taste of it, and it was so good that I’ve been seeking a duplicate ever since.  The closest I’ve come is the Bread Baker’s Apprentice pain a l’ancienne.  Mike and I used to buy their delicious sandwiches made on the French Bread and a couple of 35 cent peanut butter balls then continue down Route 1 to Miss Plum’s for a pint of ice cream; usually half raspberry chocolate chip and half coconut hash, but sometimes malted milk ball would sub in.  We would take them to Beauchamp Point 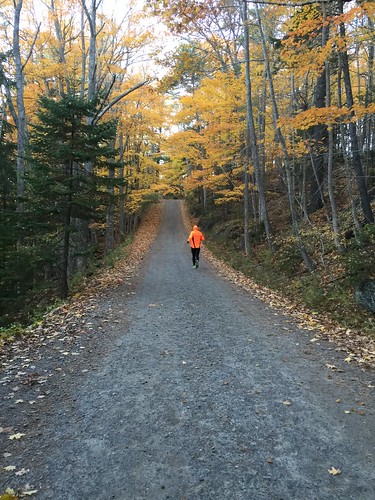 (On the way to Beauchamp Point – 20 plus years later.)
and climb down on the rocks and enjoy them along with some teenage romance. 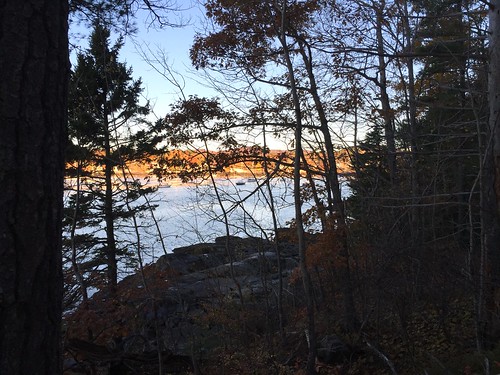 (The view of Rockport Harbor from those rocks.)
I don’t know (but I probably should know seeing as we have 3 teenagers now) if kids still do those kinds of things today.

We didn’t see any sign of Miss Plums, but Market Basket was still going strong.  The bread was yummy, and I think pretty much how I remembered it.  I really like baking, and, in hindsight, I’m pretty sure my motivation was to try to duplicate this French Bread, and, even though it’s not technically baking, the peanut butter balls, too. 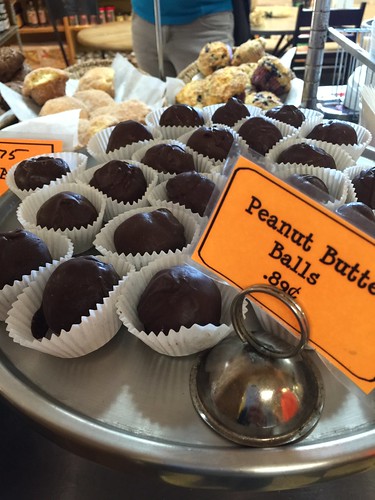 (The peanut butter balls were almost too fancy now with their white candy wrappers on the platter.  I remember them just being in a wooden basket by the counter.)
Both things were delicious from The Market Basket, but I’m satisfied with my replicas.  Even though there were kind of different (on focaccia and wraps instead of French Bread), they still had a great variety of sandwiches and we snagged a Thanksgiving-style turkey sandwich which was probably even better than the sandwiches we had back in the day and inspired Thanksgiving sandwiches for lunch/dinner today.

I was curious to see if we’d see anyone we knew, but funnily enough the only people we recognized were a couple that we know from Portland who were in town for the weekend hiking.  I think I recognized the mother of a distant classmate, but that was about it.

On our way out of town, we swung by Mike’s old house and grabbed a quick shot while the people inside were looking out at us then made our escape back to Portland. 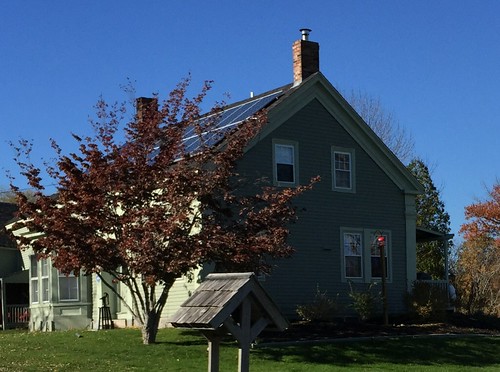 We didn’t really appreciate the area growing up, but really enjoyed going back and seeing it through new and old eyes.  Go, if you can!  We will definitely be paying another visit.  Who knows what other memories will surface.