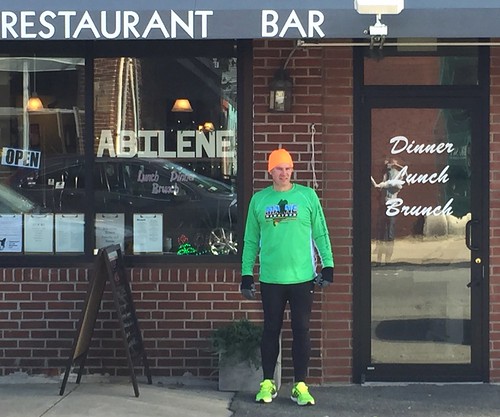 Last weekend, we had sort of an unorthodox breakfast run.  We didn’t get up quite as early as we should have and had to get our oldest daughter to dance practice by nine.  We had plenty of time to get in a 6-miler but not to also eat breakfast.  So we decided to run, take her to dance, then eat.  That worked out nicely because we decided to invite our two youngest to come along.  Sometimes I do feel guilty for ditching them in the early morning hours (even though they are often not even awake when we get home). 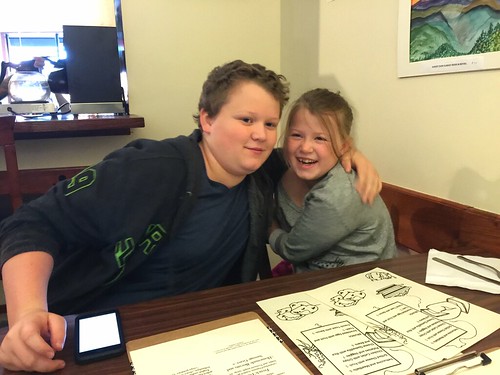 We had planned to go to our much-loved, neighborhood Bayou Kitchen.  We call it “BK” for short (sooo not to be confused with Burger King).  It’s fairly close to our house, so we walked (not ran) there with our two youngest in tow (not that young – 14 and 8).  We got stuck waiting for a (60+ car) train which was actually kind of entertaining.  As it gets colder, it won’t be.  We definitely KNOW better than to get to BK later than 9 on a weekend, but the dance thing put it out of our control (will she ever get her license????).  We got to BK and the hostess thought it would be about a 30 minute wait.  Waiting for the train was okay, but it was a bit chilly to hang out for 30 minutes in the cold, so we decided to check out Abilene next door.  (Full disclosure, you can kill lots of time checking out Artist & Craftsman across the street.  It’s very cool and interesting, but we were HUNGRY). I didn’t know much about it other than skimming a review on Portland Food Map and hearing from our oldest son (19, who had probably gone for the same reason of not wanting to wait for a table at BK) that it was kind of weird.

There was a decent crowd there, but nothing like BK, and we got a table right away.  There seemed to be only one hostess/waitress, but she managed to keep up just fine.  The biggest advantage of Abilene so far over BK was that they had adult beverages.  We’re sort of starting to setting in with breakfast drinks with Mike ordering a Bloody Mary and me ordering a Mimosa.  (Are there other breakfast drinks?  If so, please share!) 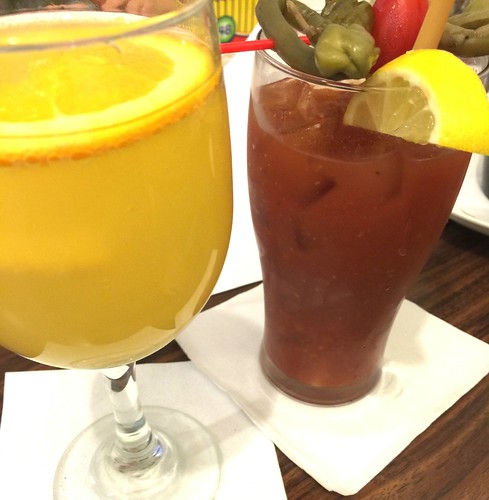 I loved my mimosa, but I was kind of overloaded on sweet, and I really enjoyed my sip of Mike’s Bloody Mary, so I ordered on of those next.  Aren’t the embellishments cool? 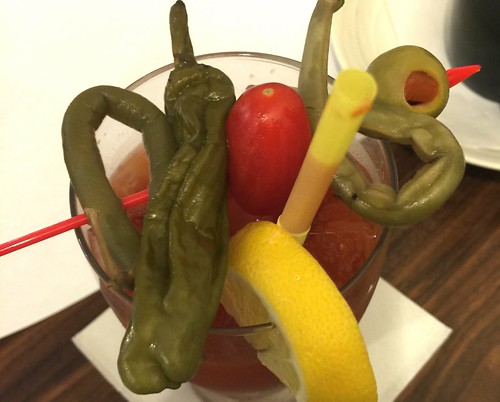 Mike is a die hard BK fan.  He struggles between a breakfast-y thing and their amazing Chicken Piquant each time and mostly ends up with Chicken Piquant with a side of Moxie and grits.  I waffle (hah, hah, just noticed the breakfast pun) between their breakfast sandwich and their nacho-style home fries with bacon, cheese, sour cream, and salsa.  I used to LOVE their home fries which had a nice taste of cajun seasoning and some crispy fried-ness on the edges.  Now they’re kind of just regular homies, so I’m not always quite so ready to hit up BK (between that and the lack of mimosas).

I was impressed with the less traditional menu from Abilene.  (Can’t seem to find the menu online.)  I ordered something sort of like Huevos Rancheros.  Apparently, I’ve been on a Tex-Mex breakfast kick.  My dish had scrambled eggs with chorizo sausage which had a great, savory flavor, although, my favorite local chorizo so far is from Hella Taco. There were some lovely flour tortillas and black beans to make into a sort of breakfast burrito.  It all had a wonderful savory flavor and nice “umami” that for me, always seems to follow anything with cilantro.  I think some cheese or crema or sour cream would have been a nice addition, but I really did enjoy my meal.  The home fries weren’t really spiced in any kind of way, but they were nice and crispy.  Sometimes texture beats flavor.  I enjoyed them, and the kids did as well, kind of like breakfast french fries. 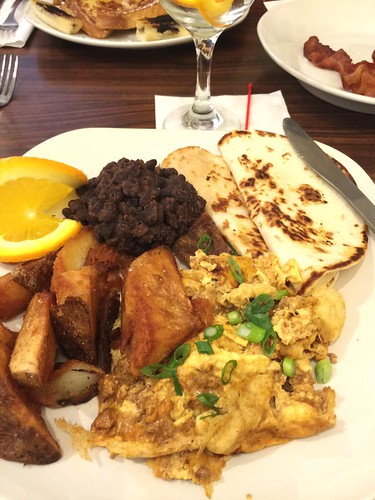 (Sorry, I don’t claim to be a great food photographer, but I’m not sure anyone can make black beans look appetizing.  It was good, I promise.)

Frank had the French Toast which looked really good.  The carmelized bananas weren’t quite as impressive as I expected, but I’m not a big banana fan anyway.  I’ve actually forgotten what Addie had, but she seemed to enjoy it.  She had a side of bacon which was well-cooked and crispy which, for me, is very important in bacon. 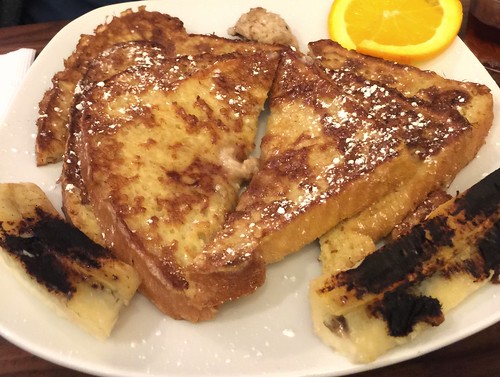 I loved that the place was very grown up, kind of hip, with an intriguing menu but still welcomed kids.  After the Marcy’s debacle, I think we’re all a bit sensitive.  At Abilene, they had an entire shelf of crayons, stickers, paper, and other stuff with which kids could entertain themselves.  In spite of there seeming to be only one bartender (who the waitress mentioned was also working in the kitchen) and one waitress, we did get served fairly quickly.

All in all, I’m very excited to have this addition to the neighborhood.  Excited to try them for another meal or happy hour.