Well, you can always start again.  Surprised to see my last post was Thanksgiving.  Actually had a  running reboot in March, but it only lasted into April.  I love the Runkeeper app because it archives all of the activities that you track.  Often, I like to look back on my past accomplishments (cue: Glory Days) and think what I can do and hope to improve upon.  This time, I was curious about my last run:

So, that was a neighborhood run during our chilly spring.  I had a rebound March and completed 65 miles, which was a nice improvement from  the start of the year.  That last run put me at 55 miles for April and I had dreams of 100+ months leading to a goal for 1,000 miles for 2019.  Let’s just say now, that’s not happenin’.

I’m trying to remember what was going on.  Still was teaching and must have just completed April break the week prior.  The biggest change at that point was that I was assistant coaching Addie’s softball team.  Not an excuse, mind you. At least it turned out to be a fun season and the team won the city championship!  Championship game was quite exciting.  We were down 6-0, but we came out on top in the end.  That’s Addie down below.  Quite the Beauty, but not (yet) into running. 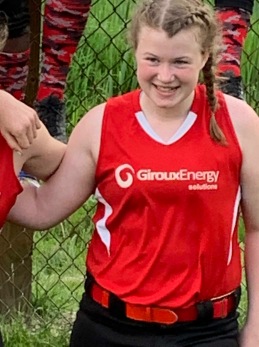 But I digress…Thing is, there has a been a lot going on in both our lives that has interfered with our running. There has been injury (Katie has a serious case of Plantar Facitis), family changes (high school graduations, ups and downs of Joe and Maggie’s college years), professional highs and lows (mostly high for Katie, downs  for me), and the realization that we’re a lot closer to 50 now.

I don’t know what to say.  I just read back to the start of this blog in 2015.  We were both running the 2015 Maine Marathon and feeling on top of the world; completing double digit runs at the drop of a hat, and having great meals, while all else was great.  Now it as if we we’re both like this:

I’ll point the finger at myself.  I’m at a low point personally and professionally (I recently left teaching for the  second time and don’t know what to do) and I am fully ready to admit that MY alcoholism is ruining our lives.  I’m an alcoholic and I admit it to our  handful of readers out there.  It is ruining our relationship, my friendships, my career, and my running.  Heck, I’ve probably been an alcoholic since my binge drinking at 18 years of age, but now it brings the whole house down. 30 years later I just see myself as a broken down drunk. This won’t cover it, but I apologize to all I’ve wronged with my drinking, but most of all to Katie. Anything I’ve accomplished is due to her and her inspiration.  You can put it in perspective of this blog: It was her idea to start it and keep me motivated to run and write.  I’ve been able to bask in great accomplishments and tell  about great adventures, but none of them would have occurred without Katie.  All people should be as lucky to have such a great partner.  I hope to recover and be a good person and partner.  If I don’t, I know Katie will make a great path in both running and in life.  I don’t know where my path will go, but I hope it is by her side…

OK, that was a lot to  load on everyone, so back to running.  I was convinced that new shoes would be the magic cure to my lack of running since April.  My sister was kind of enough to give me a Visa gift card that would have covered the cost of some new shoes, so I was all prepared to hit Fleet Feet and start logging some miles.  Instead, I ended up with these: 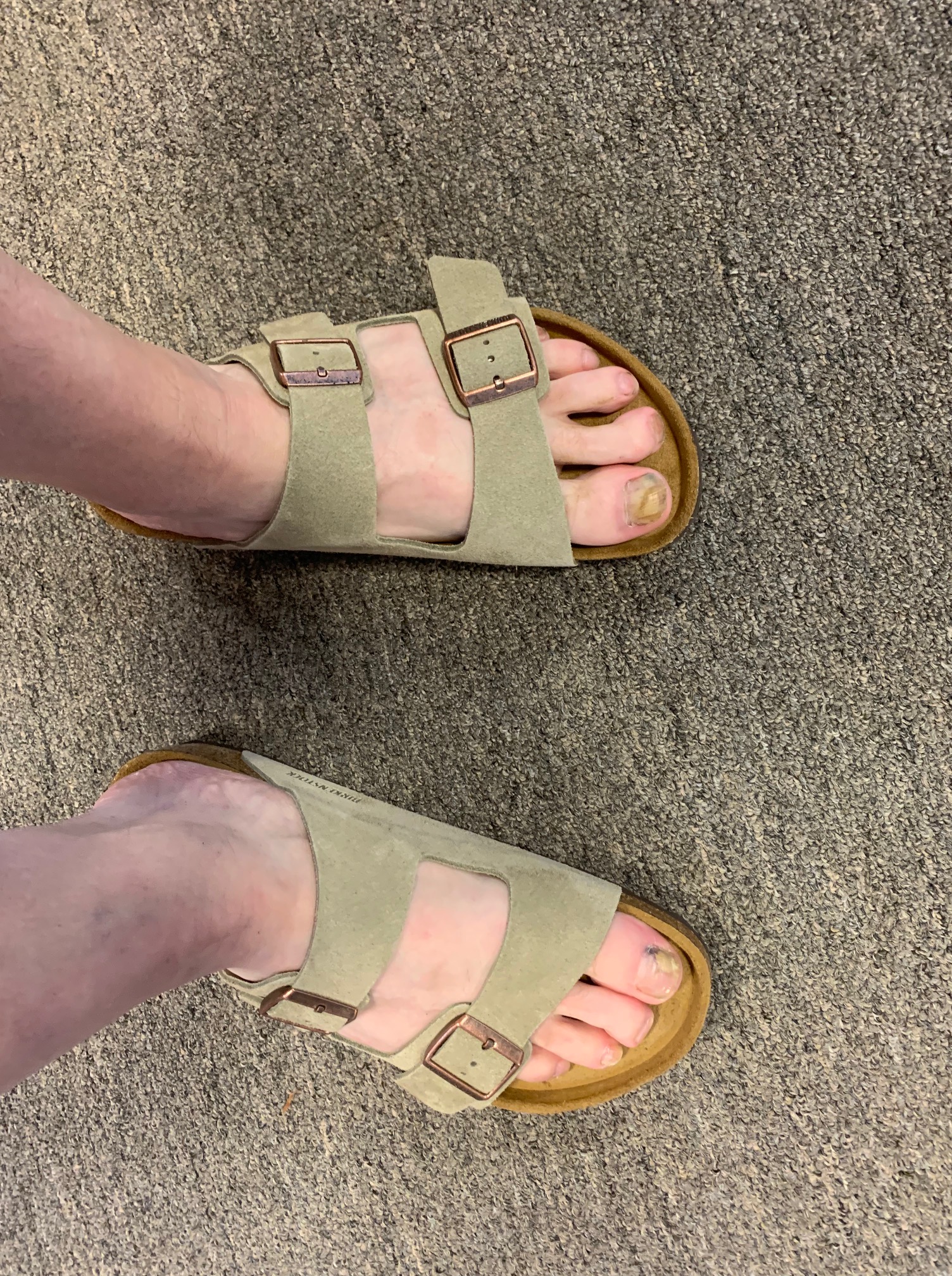 Ignore the toenails (and Gosh, are those really my ankles? ).  It took a while, but Addie convinced me they looked cool, and now I’m wearing Birkenstock’s.  I don’t recommend them for running, but they feel awesome post-run.

Katie actually convinced me to be  patient and try one of my old pair of running shoes to start a new running program.  How right she was.  I uploaded the Couch to 5K (c25k) app to my phone and then dug out these Hoka Clifton 5’s (I know that I don’t need the apostrophe there). 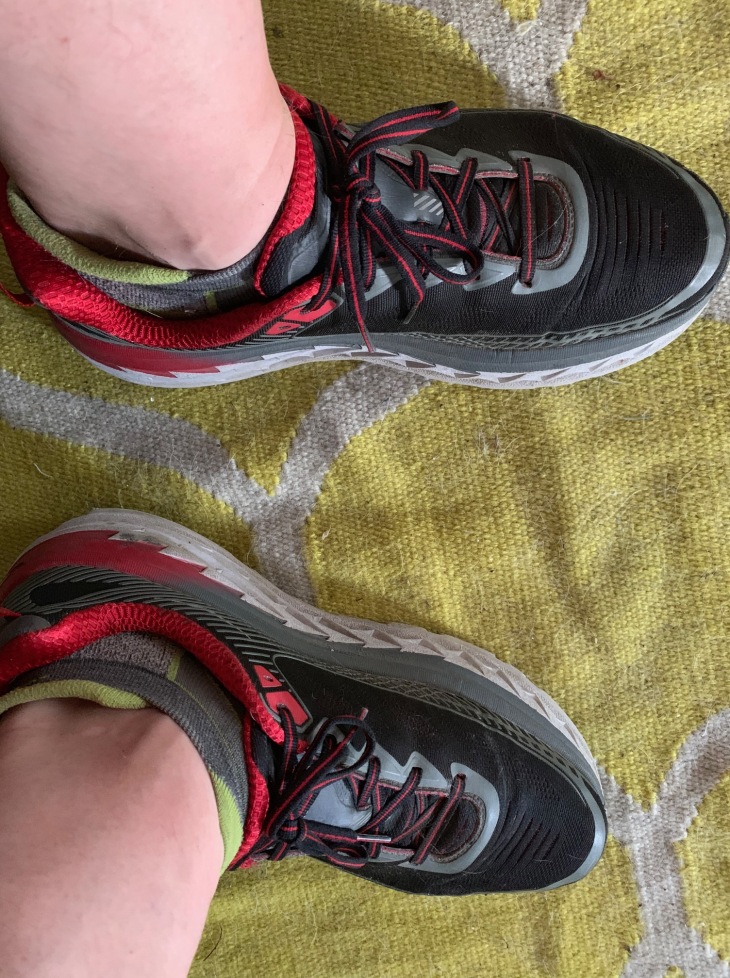 A little history on these shoes: I purchased them at the 2016 San Francisco Marathon Expo (which I did not run -a bit of a long story, a little bit due to the above narrative) and they carried me through training for the 2016 Maine Marathon, which I was able to complete using the Galloway run-walk plan.  Pretty sure they logged 500+ miles until I replaced them with a pair of Saucony’s, which in the end were not a great fit for me.  Turns out that these old Hoka’s still have some life in them.  So, a little over one week in, I have completed two weeks of C25K.

Yes, those times are ugly, but remember there is a lot of walking going on.  I’m doing it right this time.  Walking when called for and running at a good pace (sub 10:00) when instructed.  Next week some longer runs that may be  difficult.

It’s a start.  Will this be redemption (running and otherwise)?  I can’t say.  So far it has not been for our relationship, but I hope and pray for the best.  Will it be for running?  The same answer.  Last time to success was a long haul, but I made it.  The lesson I know now is to take it day by day and not rush the process.  The only thing I can say is to keep moving.