Both of us had recently been suffering from a Running Slump.  My problem has been boredom with the routes in our neighborhood, so we have decided to branch out for some destination runs.  Not far from us is the Eastern Trail down in York County.  It’s an old railroad line that has been converted to a running/biking/walking trail.  A couple of  major pluses are that it has loads of shady stretches which is a plus during July morning runs and it’s really flat terrain.

We are two weeks into some marathon training that schedules long runs on Sunday, but fortunately the long July 4th holiday allowed us to flip our long run (7 miler) to Monday morning.  That allowed us some annual Strawberry pickin’ and jammin’ on Sunday. 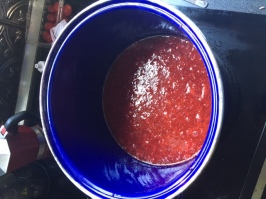 The newness of the trail for us has been invigorating and has rekindled some passion to log some miles.  It’s also nice to be off well traveled streets and enjoy some quietness other than good conversation which Katie proclaimed that I had to improve upon during our runs (sometimes I get in the zone and put on a thousand mile stare). Our long Monday run crossed three town lines and then this morning’s run gave us some adventures in Saco only. 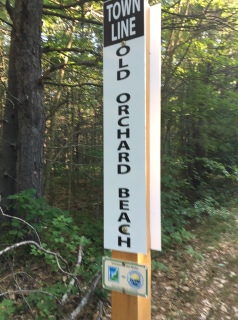 I got a nice runner’s high from these runs, but the real reward was our post-workout trips to the Palace Diner in Biddeford.  All I can say is Wow!  We had been talking about going here for a couple years and all I can say is that I wish we went sooner! There was a wait to get in since it is counter service for about a dozen people, but they are nice to provide coffee service during your wait. On Monday, despite our 8:30am arrival, I ordered a hamburger and a Coors Banquet Beer. The burger and fries were amazing and Katie ordered a breakfast sandwich that is beyond compare.  Jalapeños will definitely be a staple for our homemade breakfast sandwiches now.

Then this morning we brought our younger son, Frank, for another Eastern Trail run (Frank did a walk) and Palace Diner adventure. I don’t usually like Tuna, but the Tuna Sandwich I had was pure ecstasy!  Frank ordered the Fried Chicken sandwich and it was Heaven.  Katie  went with the breakfast sandwich again and it still impressed.

Once again, Palace Diner impressed and I know it will be great motivation to run more sections of the Eastern Trail! 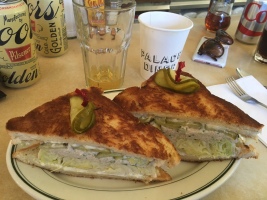 FYI: They are cash only for payment, but there is a Bangor Savings ATM nearby on Main Street.