Not really a breakfast run, but I did manage to squeeze in my first double digit run of the year after work today.  It had been a while, but I managed to run across to Falmouth on a mild March afternoon, although it was chilly on the way back. 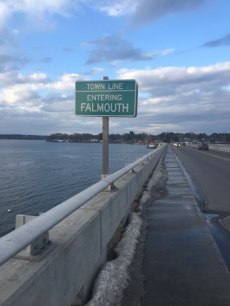 Was pretty worn out after, but Katie convinced me to set out on our first Errandonnee 2017 Challenge event of the year to bring home dinner from OTTO Pizza on Read Street.  We’re no strangers to OTTO, in fact in my own unofficial ranking of Portland pizza, OTTO is on top (followed closely by Pizzaiolo and Portland’s newest, Tipo).

There was some chill to the night air, but we had a pleasant ride there.  We put in our order for a large cheese and small sausage with Vidalia Onion.  Otto has some fantastic speciality pizzas, but it is their basic pies that really sell me.  Our only concern about the order was securing them to our bike on the way home, but bungee cords did the trick. 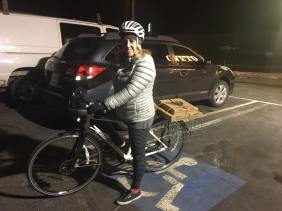 We decided to order at door for the pizza rather than ordering ahead, so  it would be fresh and hot for the ride home.  At the bar we enjoyed a couple of local brews and I had an extra special treat of UFF dry cider (more on them in another post soon).  We also ordered the bruschetta appetizer, which was OK.  The balsamic had a nice flavor, but I prefer my tomatoes chopped smaller and the bread was a bit dry.  That did not stop us from eating all though since we earned the calories on our ride. 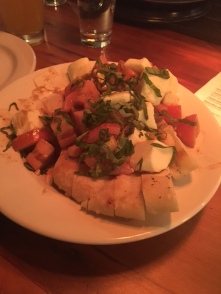 We made the ride home and like usual, the kids (and us) made sure there would be no pizza leftovers for lunch the next morning.  OTTO’s pizza continues to impress even when delivered by bike on a chilly March evening. 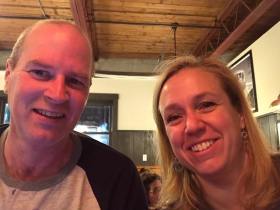