Wow, this post has been on my mind for such a long time.  I was on a roll blogging about our trip in February then kept finding excuses to put this one off which pretty much prevented any other blogging because, of course, I wanted to be chronological.

Don’t worry, we’ve still been running and definitely eating just not necessarily at the same time.  I finally lost my tolerance for cold which has reduced the appeal of the breakfast run for me.  I just can’t warm up again once we stop to eat.  Thank goodness warmer weather is just around the corner. 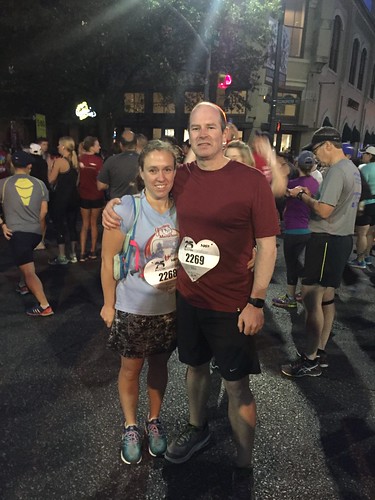 One of my favorite parts was milling around in the middle of the city with thousands of other runners while it was still dark.

There was no traffic, of course, and even though there were a lot of people, there was plenty of room to spread out, so it just seemed peaceful.  The capitol building was beautifully lit up at the top of Congress Street. 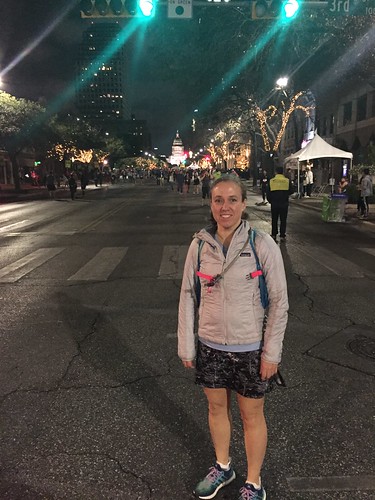 See the Capitol Building in the Background?

There seemed to be a feeling of relaxed anticipation – the calm before the storm.  Maybe that was just my feeling, but after months of getting ready and thinking about the race, (agonizing over my training times, wishing I’d skipped a few more cookies, etc.) and getting more and more nervous by the day, I was relieved to be on the verge of just. doing. this. thing. 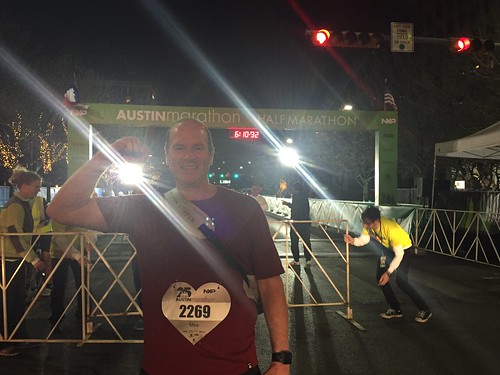 Once the National Anthem started, my nervousness came rushing back.  Then finally the starting gun went off and minutes later we crossed the start line, and we were RUNNING!  Even though I could swear it was still dark when we started, it felt like sunny midday by the time we crossed the bridge and started up South Congress street.

My first mile was great, but by mile 5 I was kind of falling apart.  I hadn’t been able to eat much before the race – too nervous – so I had my first Gu.  I knew Mike was somewhere behind me.  I thought about trying to wait for him in hopes that he would help motivate me to keep going.  By mile 7 or 8, the Gu kicked in, and I felt okay.  (Note to self – eat before the race – no matter what!)

My confidence really wavered during the whole race – feeling great one minute, feeling like I couldn’t finish the next.  I think it was around mile 12 when the half marathon split off.  It was so hard to make myself stay on the left for the full!

We had a friend there cheering us on at around mile 18 or 19.  Looking forward to seeing him really helped.  And it was a pretty great feeling once I reached the last 6 miles.  I took about 3 or 4 walk breaks which I’d never done before, but it sure did feel great to walk and drink my water and eat my Gu without being out of breath.

Finally, I was running through the UT campus and on the last stretch.  There was one more really ugly hill during the last mile then I was able to sprint down the hill to the finish.  What a relief!  My slowest marathon and probably my hardest.  I finished in about 3:58.  Nice to stay under 4 hours but almost 15 minutes slower than my previous slowest marathon. 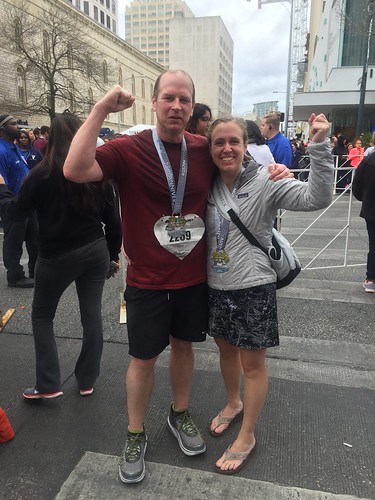 And you know what?  It really didn’t matter.  I was still just as ecstatic as I was when I completed my other, faster marathons.  I had exactly the same feelings of relief, accomplishment, and that indescribable post-race euphoria.  As I get ready to run Boston IN TWO DAYS, I keep trying to remind myself that.

The race itself was really well organized.  I actually can’t think of a single thing to improve in that area.  The spectators were awesome.  I was pretty jealous of quite a few groups that were partying in their yards while watching the race.  One group was drinking mimosas, and I almost stopped and just hung out with them for the rest of the day.  The signs were all very entertaining.  I can’t believe I’d never seen this quote before, but there were quite a few signs that said, “Whether you think you can or you can’t, you’re right”.  That hit home for me, since I was having such a mental struggle during the race.

The course was really hilly!  It was described as having “rolling  hills”.  We both thought that Texas was super flat, so it couldn’t possibly be as hilly as The Maine Marathon.  We weren’t worried about the hills at all.  Apparently, Austin is in “Hill Country”.  Oops.  There weren’t any hills that I remember that were particularly steep (although I hear there’s a killer one on the half marathon course) – it was kind of like the accumulation of them just snuck up on you.  The first 2 miles or so were almost all uphill (which I had read), and I started too fast as usual which I think might have been part of my problem.

We had been more worried about the heat.  You can’t exactly train for that in Maine in January.  It turned out to be quite nice – in the 50’s with a bit of a breeze.

We will definitely do this race again!  Well, maybe.  Lots of other places to visit.

Whew, finally finished a blog post.  Thanks for reading.