I was really nervous for this race.  I hadn’t trained as well as for my other races and had been eating like a pig since Thanksgiving.  I skipped almost the entire pre-race week of running, so when we saw that there was a group run that morning, we jumped on it.

I was actually a bit sluggish when the time rolled around.  We had to find the Stevie Ray Vaughan statue – wherever the heck that was – but Mike was motivated, so he tracked it down for us.  We weren’t sure what to expect – a huge group – or no one else but us.

I had read that Dick Beardsley would be hosting the event, and I immediately recognized that slim, elite runner build when we arrived that the meeting spot.  Even though I knew he would be hosting, I didn’t really expect to be able to talk to him.  I’m kind of shy, and I figured there would be lots of other people vying for his attention.  However, when we arrived, there was just a handful of people milling around, and Mr. Beardsley came right up to us and introduced himself – so cool! 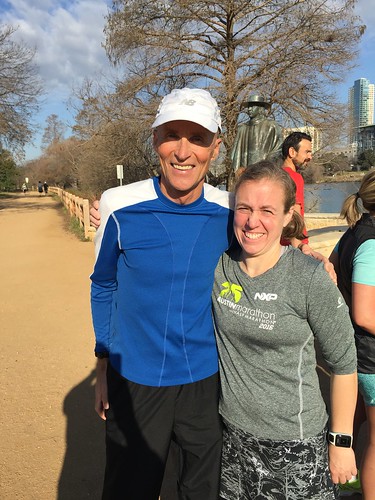 He spent quite a bit of time chatting to us before we started the run – such a down-to-earth, friendly guy.  We really enjoyed talking with him.  I couldn’t believe we were standing there (calmly – for the most part – I look pretty dorky) next to the 33 year Grandma’s Marathon record holder (meaningful to me especially, since Grandma’s was my first, and ironically, that record was broken the year I ran it).  I really hadn’t known much else about him, but check out his story.  It’s pretty interesting.

We finally set off on the run, hosted also by Bobby Overton from SpiBelt – also a super nice guy – especially considering his task of herding us cats.  (We both felt a little guilty that Mike was wearing his new FlipBelt.)  I wasn’t sure what to expect from the run either.  Some of the other participants looked like they might be around our same pace (you never really can tell by appearances), but I was pretty sure that even though it’s been almost 34 years since his exciting Boston Marathon finish seconds behind Alberto Salazar, Mr. Beardsley could probably still set a pretty darn good pace.

We set out on a nice, easy run.  I was even able to run up ahead to snap a photo. 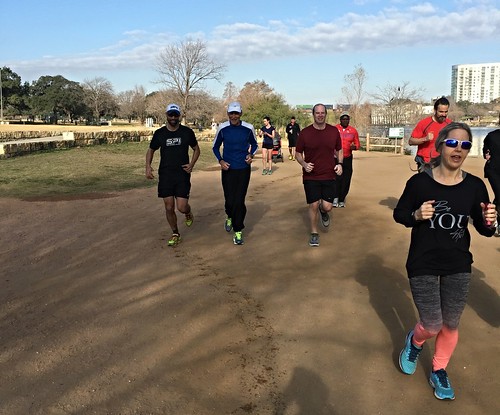 We ran along the Lady Bird Lake Hike and Bike Trail which was really beautiful.

Mr. Beardsley told me how part way you used to have to go up on the highway and back down, but they’ve since made a beautiful boardwalk to connect those two ends of the trail.  We got to run along that and had beautiful views of the city from there.  I got to run with my new friend, Dick, the whole way to our turnaround point. 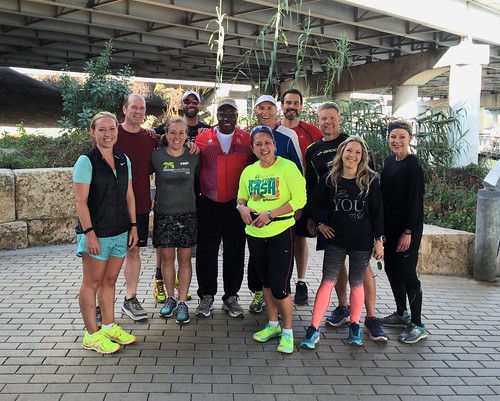 We had a great conversation, and he even recommended a few marathons to me (Fargo Marathon and Dick Beardsley Marathon – he was very humble about it being called that).  I kind of felt like I was hogging him, so I chatted with a few of the other runners on the way back.  One of whom was none other than Henry Rono, a 5000 meter record record breaker in the 70’s and 80’s – among many other accomplishments.  He was also very humble and interesting to talk to.

It was great to be in the midst of such running fame, but the other people in the group were friendly and fun, too.  One guy was running his first marathon, but quite a few of the others had run Austin before and were able to give us good advice about the course and about where to visit in Austin.  (Thank you for your advice about the speed bumps and your recommendation of HopDoddy’s!) 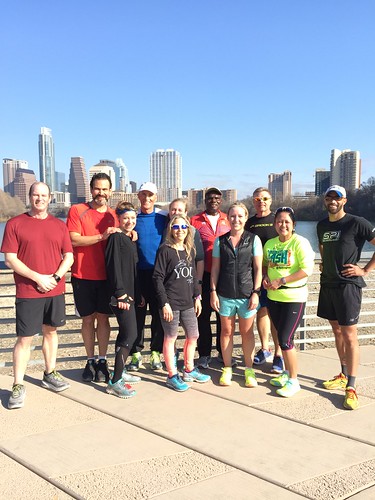 What an amazing experience!  I was happy to have done the shakeout run, since it helped me remember that I did still know how to run.  But more than that, it got me excited about running again – what a great community and a great way to interact with people.  You already have something in common.  Somewhat surprisingly to me, the conversation that Mr. Beardsley and I had about running wasn’t any different than I conversation I might have with any other, average Joe runner like myself – the nerves before a race, the gear, the locations.