Now that this weekend is almost half over, I’m finally getting around to finishing up blogging about last weekend.  As if a lovely First Friday Art Walk wasn’t enough, we had fun plans on Saturday, too.  One of Mike’s students gave him tickets to a matinee Nutcracker performance at Merrill.

For us, no outing into town is complete without some kind of food, so we decided to hit up Pai Men Miyake for lunch before the show.  I’d been there a few times and wanted Mike to try to pork buns which I love.  They’re a twist on the classic DimSum with the fluffy white bun but served more burger/sandwich style rather than the meat being all tucked away inside.  The serving-style isn’t the best part of the twist though.  That’s the tender, juicy, warm pork belly along side the cool mayonnaise and spicy relish.  I thought it would be totally up Mike’s alley, but it turns out he’s a traditional pork bun kind of guy.  No worries though, he managed to clean his plate, and we got plenty of other treats. 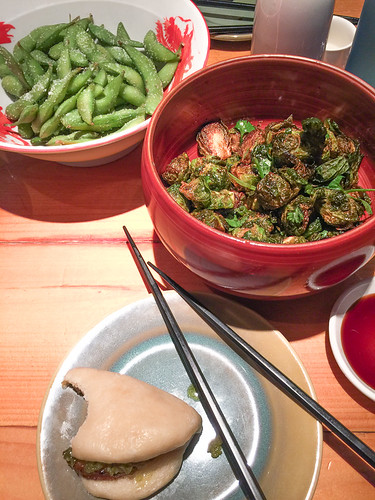 Edamame is always such a great snack, so we started with that, and it was perfectly salted.  I had thought the Brussels Sprouts there were the best I’d ever had, and they were very good but not the ones I remembered.  Now, I’m thinking those were from When Pigs Fly in Kittery.  I’m going to have to go back now to figure this out!

Of course, we also had to try the cocktails.  Mike had warm sake which was perfect for a chilly day.  I had the Smoke & Roses cocktail which is kind of like a rose flavored margarita.  You’d think that drinking rose flavor would be weird, but it’s actually very delicious.  I had to have two.  It’s my favorite cocktail I’ve had in Portland so far. 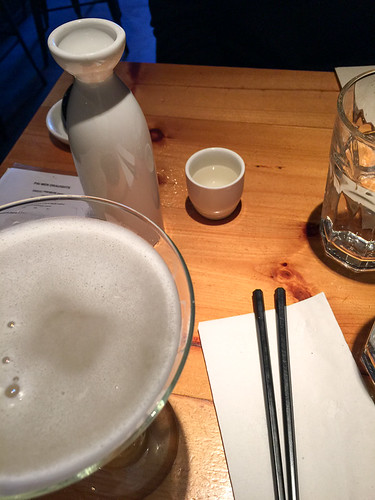 We were pretty full of appetizers but wanted to try one more thing so we ordered the Kimchi Pork Ramen.  Mike managed with the chopsticks quite well . . . 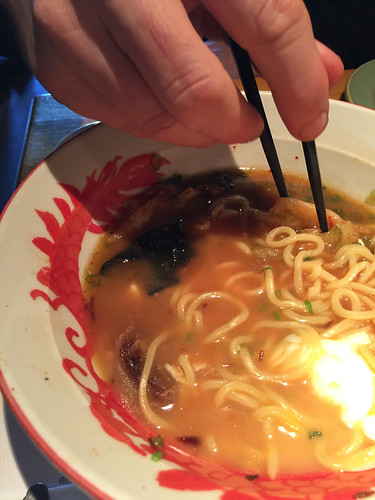 but I was pitiful and had to ask for some American utensils.  My favorite part of the ramen was the egg with the crunchy little onion strings on top of it, but that all quickly got lost in the bowl thanks to my poor initial attempts at using the chopsticks.  I didn’t love the pork itself.  Mike thought it tasted like the meat from a New England boiled dinner.  He meant that as a compliment.  I agreed that that’s what it tasted like, but to me, that’s not a compliment.  Not my favorite dinner!

Don’t let that scare you away though.  The starters and the cocktails are excellent and the atmosphere is nice. 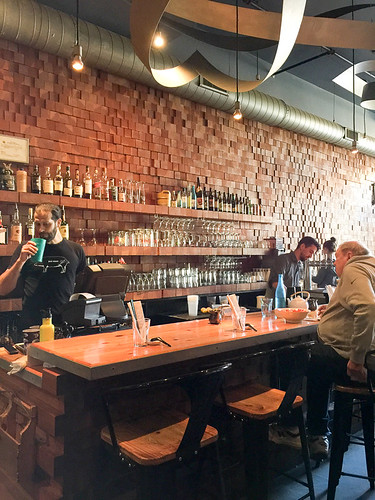 You can sit at the long, two-part counter, or at one of the high tables for two across from it which is what we did.  I felt like we were in our own pleasant little world.  There are also quite a few larger tables in the front of the restaurant.  One of my previous visits there was for a co-worker’s going away party, and we fit 12 or so of us quite comfortably and had a great time.

After all that eating out, we decided we’d better do some of our own cooking on Sunday.  After our Figgy’s discovery on Friday night, Mike texted me from Addie’s basketball practice to tell me he’d had a revelation.  I was expecting a career change, a move, something life-changing (and maybe it was), but the revelation was that we should have fried chicken sandwiches for “football food”.  I was totally on board thinking we’d do takeout from Figgy’s.  Apparently that wasn’t what he had in mind.  He wanted to try making our own.  Not quite as easy and not as guaranteed to be good, but I was game.

I found a biscuit recipe on-line and sent Mike a grocery list while he picked up the chicken at Pat’s.  I made the biscuits and left the rest up to him. 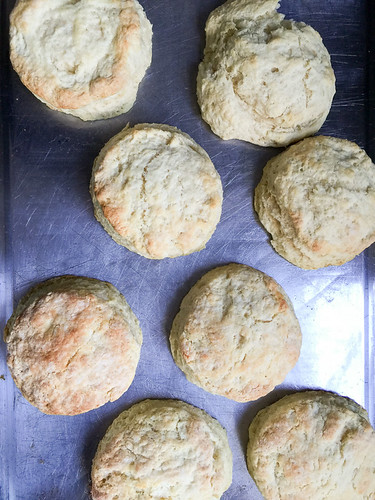 I had one with strawberry jam while I was waiting for the rest of the meal to come together. Not bad!

We used store-bought coleslaw and skipped the mashed potatoes and gravy, but they still came out pretty darn good. 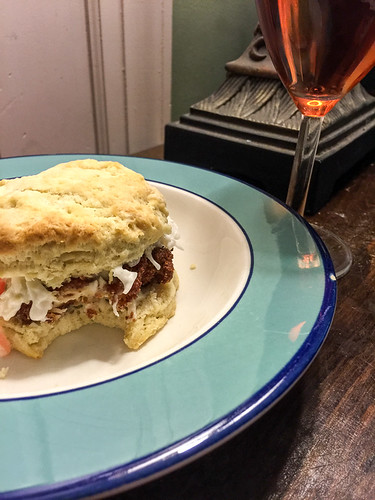 No breakfast run this weekend.  We’re getting ready for a Festivus Party at our house later in the week, and we have a race tomorrow – which actually does include brunch.  I guess we’re technically having a breakfast run after all.

Happy weekend.  Thanks for reading.