As great as it was to spend some time in Rangeley recently, it sure is nice to have a weekend at home, especially one with relatively few commitments now that Oireachtas is over.  We made sure to pack this one full of eating, running, and relaxing.

I ditched work a little early on Friday to get a much needed haircut. 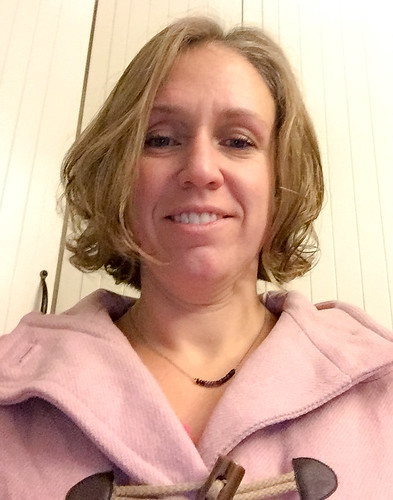 I think she cut off at least 8 inches, so it’s a big change for me.  Still getting used it it and trying not to think I look like a boy.

I still managed to beat everyone else home, so I had a few minutes to check out my just-arrived order from Amazon, more about that another day.

I was just starting to relax when Mike reminded me about First Friday Art Walk.  Most of the time, we forget that it’s First Friday and end up missing it.  I was feeling a bit lazy this past Friday, so I could have been convinced to skip it, but I’m so glad we went. It was the perfect time to go with town all decked out for the holidays.

We dropped our two still-at-home teenagers off at their respective places of employment and went on our merry way with our youngest, Addie, who is a veteran art walker.

We parked on the west end of Congress Street and started to make our way down toward the action.  We just happened to spot Figgy’s a few blocks from our car. 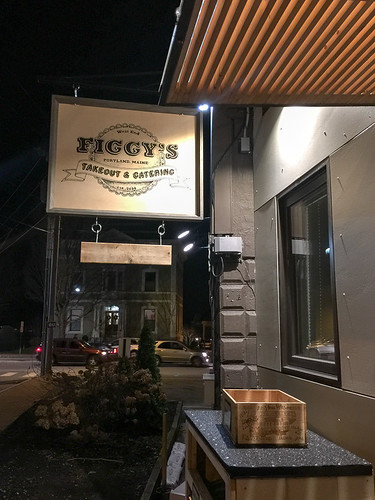 I’d heard a bit about it, so we walked over just to check it out – for another time.  We weren’t going to get anything, since we were planning to get a slice from Otto’s once we got down that way. 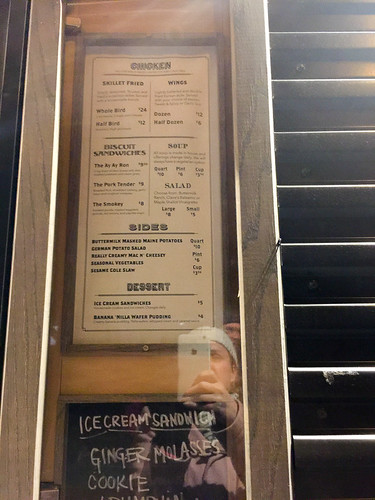 But the menu looked so good, we thought we’d just get a little biscuit to tide us over. 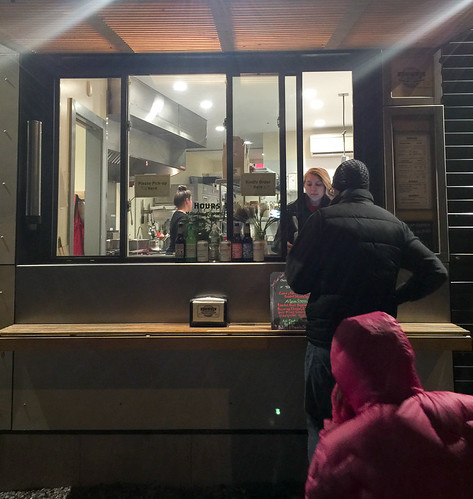 We ordered “The Ay Ay Ron” (no idea why it’s called that). 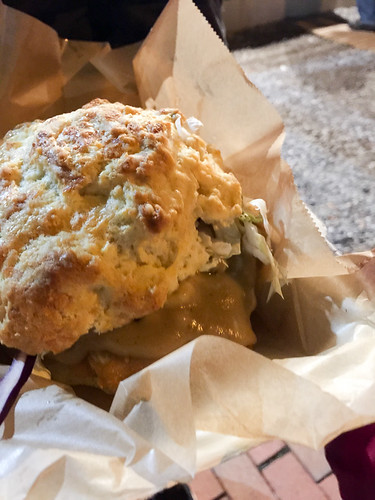 It turns out it wasn’t such a little biscuit.   Here’s some perspective with our favorite little photo bomber. 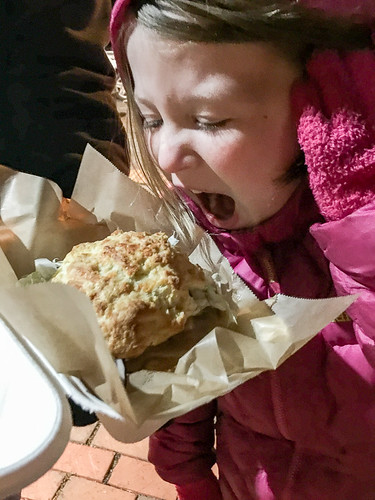 It wasn’t little, but it was amazing.  The fried chicken was just perfect.  It had been flattened which I really like, so there’s an equal amount of “fry” with the chicken.  The breading (panko, I think – but very classic) was perfectly golden and crispy.  And the rest of the sandwich . . . wow!  The biscuit was one of the best I’ve had.  You could just taste the butter.  It was one of those messy, drop biscuits that has those bumps of delicious imperfection.  The coleslaw was a great cool contrast to the warm fried chicken, and the mashed potatoes and gravy were just over the top.  We managed a few, very messy bites before we realized this was not “walking” food.

The picnic tables looked kind of inviting, but not on a cold December night.  We decided to walk the two blocks back to the car and stow the biscuit for later.  It wouldn’t be the same cold, but I wanted to savor it with a knife and fork at my kitchen table. 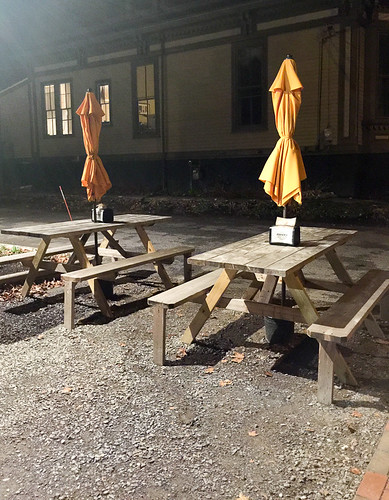 On to the art walk . . . My favorite stop was the She-Bear Gallery which had a bunch of Holly Meade wood block prints.  There was a great little Christmas banner in the window which I loved and had also happened to notice on my run that morning.  Unfortunately that was not for sale.  (I asked.  Apparently, I wasn’t the only one.)  We also really liked the Holly Meade “New Years Eggs” print which would be a great gift for my dad or sister who together raise egg-laying chickens.  (Sorry, Dad and Maggie, not in my price range.)

Addie’s favorite stop was Coast City Comics.  They had everything you could imagine from a full-sized Storm Trooper outfit to a tiny Adventure Time Key Chain (which Addie scored) to a Tyrion Lannister figurine to old arcade games and pinball machines in the back.

We finally made it to Otto’s which was a relief because after a few free glasses of wine at the various galleries, I really needed to use their bathroom.  We usually just get a slice and move on, but this time, we found a seat on the Enzo’s side and got to relax 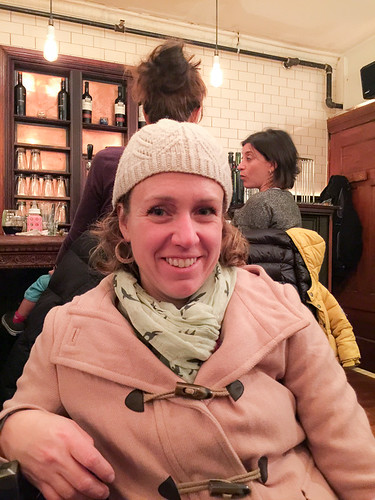 and goof off in the warmth for a bit. 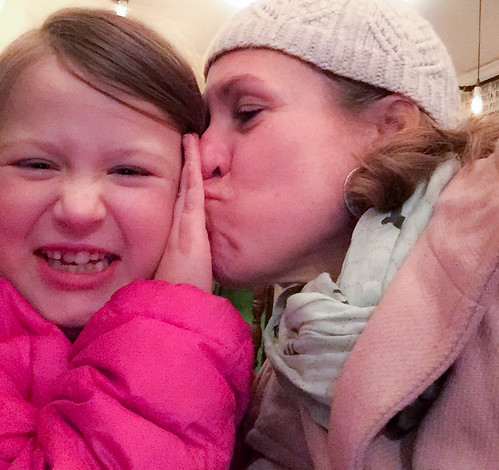 It was margarita and mashed potato, bacon, and scallion along with a couple glasses of wine for Mike and me, and cheese with a lemonade for Addie. 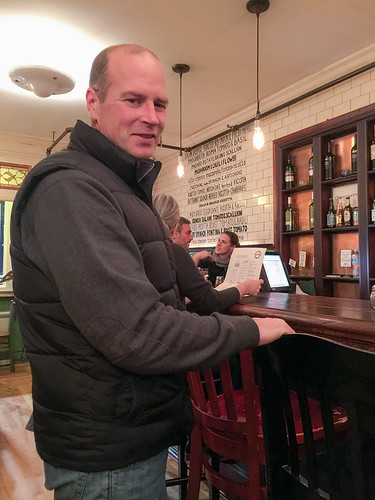 We saw this cool truck on our way out. 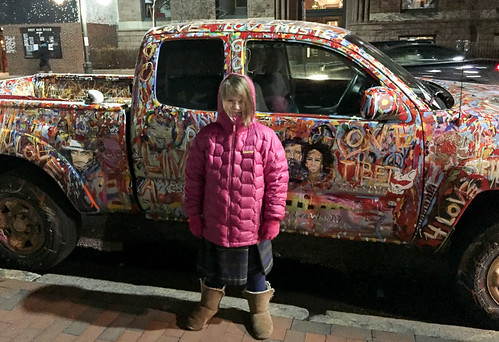 We continued down Congress to check out the Christmas Tree in Monument Square.

Addie took a turn with the camera.

The tree was beautiful, but I also love all the other lights they put up around town. 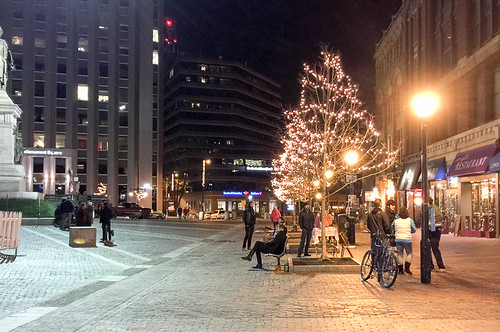 Addie liked the Santa hats on the Time and Temperature building. 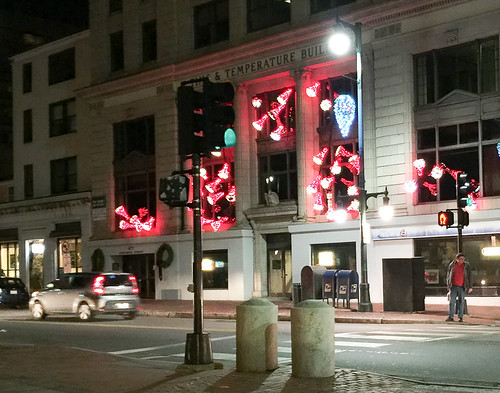 My favorites were the ones on meca 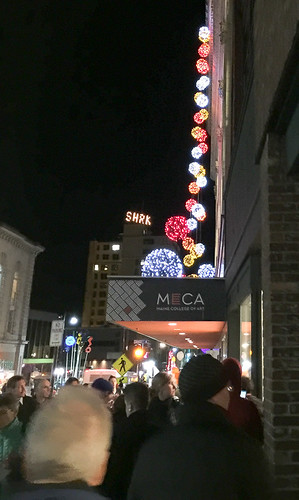 and by The Eastland. 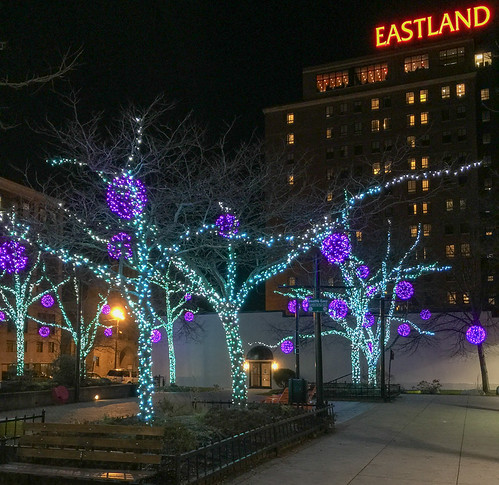