We hadn’t really discussed doing a breakfast run this weekend.  I was too full from Thanksgiving to really even think about going out.  Saturday morning, it was pouring rain, and I was lazy, so I skipped my run altogether.  It stopped raining fairly early, so Mike ended up rallying and heading out.  I could have, too, but my mind was made up.  I felt guilty, as I always do, but not too bad, since I did run every mile that I had planned to run in Rangeley in spite of the grueling hills.

We didn’t plan to run together on Sunday.  It’s usually a long run day for both of us (but it never seems to be the same distance), and I feel like it’s best to focus on that and not make it a more casual breakfast run.  Just the same, we were missing our breakfast runs, so we came up with a plan to just meet up for coffee at Black Cat.  Sounded great Saturday night before we went to bed.

Then, apparently, we woke up hungry because we started thinking about a more substantial breakfast from Bayou Kitchen.  We’ve been there what seems like hundreds of times in our ten years in this neighborhood but still haven’t written a review.  In addition to waking up hungry, I woke up unmotivated.  I had planned to run 18, and I knew Mike was going to run 13, so I figured it would just simplify everything if I also did 13.  So the new plan was set for BK.

We set out on one of my favorite routes which goes over the bridge into SoPo, along the Eastern Trail for a while, past Scratch Baking Company (another great breakfast option), and to Portland Headlight.  6.5 miles gets us to the gate of Fort Williams.  (It takes you past a Hannaford at about 3.5 miles in case you need a bathroom break.)  Mike was setting a nice pace, a little faster than I would have liked, but I was looking forward to pouring over the stats when we got home.   He always seems to want to sprint up the hills.  What is UP with that?!

At about mile 10, his knee really started to bother him, and I could feel him slowing down.  I didn’t slow down much though because, usually when I do, he speeds up again which drives me nuts.  Finally, after about a mile of that, I decided we needed a new plan and suggested we stop for breakfast in town (we were just coming back across the bridge) rather than try to go all the way to Bayou, so he could rest the knee for a bit.  Ohno Cafe seemed like it would be the closest and the most likely to be open – it was still pretty early – so we headed that way.  Unfortunately, they were closed for vacation.  We’ve been wanting to try Caiola’s, so we (well I) swung by there next.  At this point, Mike was really slowing down, so I ran up ahead to check the hours, no luck.  Next we headed to Longfellow Square figuring something there must be open.  LFK, nope.  Local 188, nope.  Then the lightbulb moment, Hot Suppa, of course!  I knew they opened early.  They were open, and it was nice and warm in their vestibule, but after spending a few minutes consulting our  phones for other options, we decided we didn’t want to wait (they were estimating 30 minutes).  Finally, we figured out we could go to Dutch’s!  While still in the warmth of Hot Suppa, I consulted my phone to make sure they’d be open.

Aaah, finally getting to sit down. 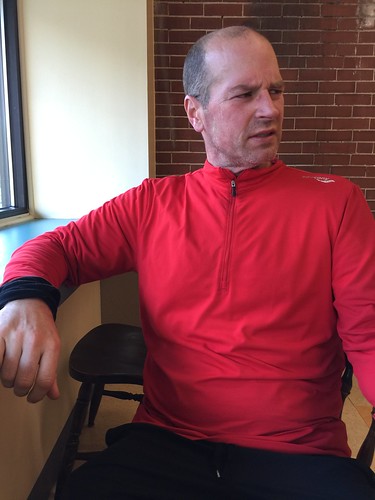 I know I’m making it sound like this was our last choice, but Dutch’s is by no means a last choice breakfast destination.  We’d just been looking for the closest place to sit down.

We’ve actually been to Dutch’s quite a few times now.  The first time I had been lured in by a Yelp Reviewer who poetically said something to the effect of their home fries being like hash browns and tater tots getting married and having beautiful square children.  That’s no lie.  The home fries, hash browns, whatever you call them are amazing; crispy, crunchy on the outside and soft and potato-y in the middle.  The first time I went I had the breakfast burrito which is stuffed with those, eggs, cheese, and a bunch of other good stuff.  It was my first time having chimmichurri sauce which I thought was heavenly (not for you cilanto haters though).

Our youngest daughter was with us when we went, and she really wanted pancakes.  They didn’t exactly have pancakes, but they recommended the griddle cakes they use for the MacDutch breakfast sandwich.  OMG, those were so good, much more substantial then a pancake (as you might imagine if you’re going to use it for a sandwich) with just a bit of greasy crispness (what’s a nicer, GOOD, word for greasy?  because it was greasy in a good way – buttery maybe?) and these little crunchy surprises of sweetness on the top.  Turns out those were little maple sugar candy kind of things.  She didn’t eat all of her griddle cakes, so we took the rest home, and I took a delicious bit every time I walked by until they were gone.

I ended up liking the hash brown thingies that were in my burrito so much that I wanted to just get those the next time I went back, but I also wanted to have those griddle cakes again.  What to do?  There were four of us there that time, so I convinced the crowd that we should have a breakfast appetizer of the loaded hash browns – kind of like nachos with hash browns instead of chips.  This was the only thing I didn’t love at Dutch’s.  The cheese sauce was a white version of the stuff you’d get on your nachos at the movie theater.  I’m definitely not above that and have eaten my fair share of it, but on the hash brown beauties at Dutch’s, I wanted real, sharp, cheddar cheese.  We all found ourselves eating around the cheese sauce.

For my “main course”, I did end up getting the MacDutch.  I wanted those griddle cakes again, and they were every bit as good as I remembered.  The inside of the sandwich was good, too, but definitely not as memorable as the bread.

This, most recent time, the croissant sandwich on the specials board caught my eye, but as I stepped up to the counter to order, this gorgeous creation caught my eye. 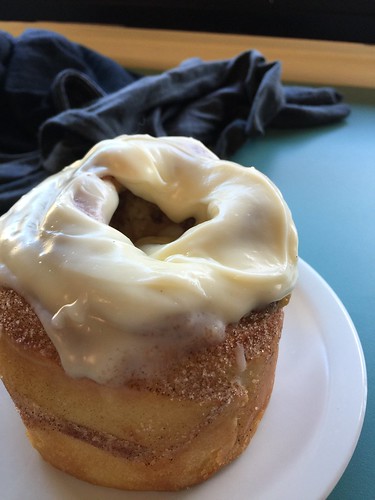 I just had to have it – a brioche cinnamon bun – and it was so worth it.  The pastry to cream-cheesy frosting ratio was just right.  The middle – always the best part, right? – was perfectly ooey and gooey and frosting-y.

Mike remembered my delicious burrito from our first visit and didn’t even seem to consider the rest of the menu before ordering that. 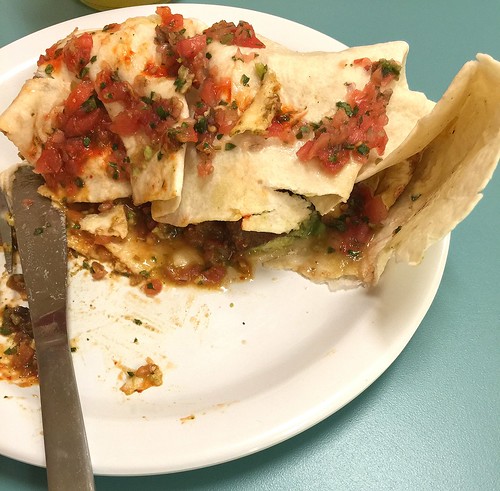 (Pretty much destroyed by this point)

They have a nice website whose pictures will make you drool.  If you’re like me and need some time to digest the menu (ha ha pardon the pun), I suggest you check out their menu on-line before you go.  (You order at the counter vs. having a server come to the table.)  Then you can focus on the specials board (every time I’ve been they’ve had 5 or 6 specials) and weigh your options.

I was a little surprised the first time I walked in.  The interior is quite spacious and spartan. 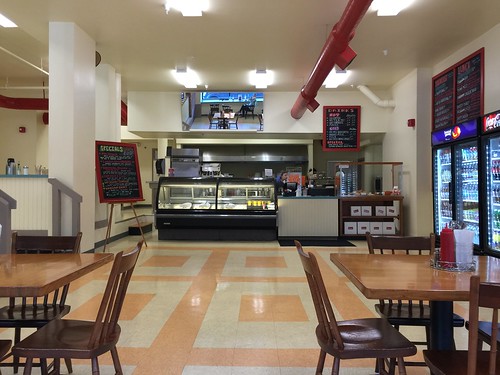 It’s not what you would call a cozy restaurant, but I’m thinking they must do a strong take out business during the work week so probably need the space for a long line.  They have a cool old-style, postcard-like mural on one of the walls, and the bathroom is wallpapered with old Maine Gazetteer maps.  The decor is very down-to-earth, similar to Bayou Kitchen and Sinful Kitchen.

It’s not in the best part of town, but it’s across the street from Slab, so it’s in good company.  There’s a countertop at the window facing Preble Street where you can sit and watch the world go by.  You may have some of Portland’s less fortunate stop and stare in the window not realizing you’re sitting there. 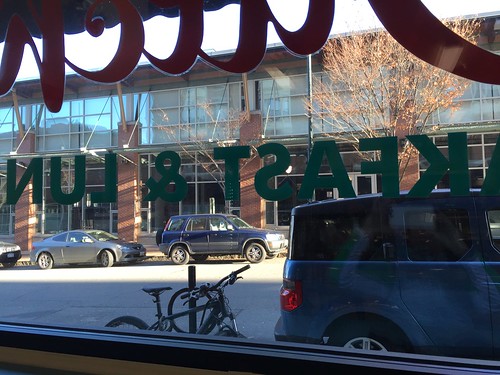 Back on the running side of things, I started to think even my cut back mileage was at risk when Mike started hinting at taking the bus or a cab (or uber if we were cooler, younger) home.  I usually bring a second set of clothes to change into when we go on a breakfast run – or at least a shirt – so I don’t freeze to death as my sweat starts to get cold.  This time I didn’t.  I was freezing, so I was anxious to finish up breakfast and get home.  The idea of a warm cab was very tempting (waiting for the bus in the cold, not so much).  I decided I’d eaten all the cinnamon bun brioche I possibly could and would warm up a lot faster if I just started running again – probably in the time it would take for a cab to arrive.  Besides, I really didn’t think I could stomach wimping out on a breakfast run like that.  (No offense, Mike.)  Seemed like a slippery slope to start down.

Mike and I agreed that he would get a coffee and have a long, leisurely breakfast while I ran home to get the car.  I managed to get 14 miles in, and he managed to limp out of the restaurant to the car (and has run a few times since), and we can still say we’ve never not gotten ourselves home after a breakfast run.

Thanks for reading.  Happy eating and running.