Mike just wrote a great post about Oireachtas weekend which, for us, has always been the weekend before Thanksgiving.  I took our daughter down for the first seven or eight years, so Mike has taken over for me for the last few years.  There’s always a lot of stress leading up to it; rehearsals every spare minute, costume prep, and bleeding money for fees, wigs, tights, socks – you name it, but there’s nothing more stressful than actually being there with thousands of stressed out girls and their often more stressed out mothers.  Not having to go is priceless.

After spending the last few weekends engrossed in Irish dance, I was so excited to have a free weekend ahead of me.  Because I really know how to party, I went crazy in the kitchen preparing for Thanksgiving from morning until night.  The only other thing I did was run.  I ignored my poor son who was quite content to play video games in his room, have a break from the girls, and visit me occasionally for a snack.

Friday night, I made my favorite granola which I only finally remembered to start eating yesterday. 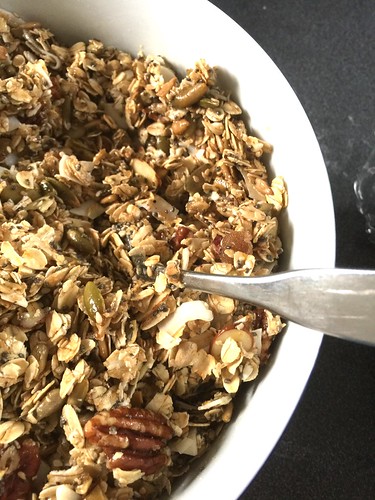 I also made this really yummy farro and roasted grape salad – not for Thanksgiving – but just because I wanted to. 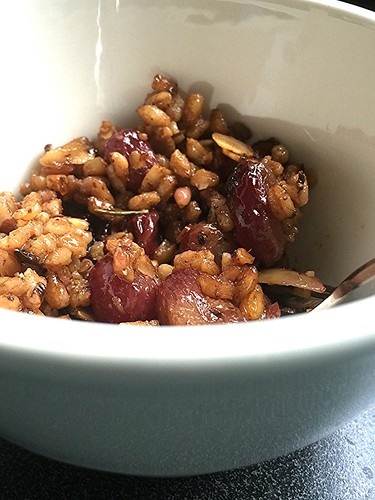 I’d been intrigued by the idea of roasting grapes since reading this Smitten Kitchen post a while ago (still haven’t tried that recipe). 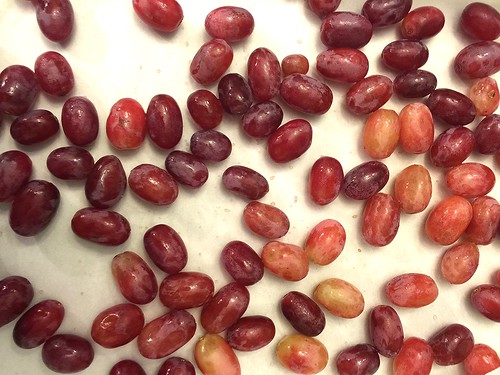 I think it was one of my favorite things I made the whole weekend.

Saturday, I decided to stay in bed as long as I wanted, since I didn’t really have to be anywhere.  I was on the road for a run by 6:15.  Isn’t that always the way?  When you can sleep late, you don’t?  Anyway, I was excited to get back to the kitchen and continue my baking spree.  I made bagels (including these healthy ones for after the holidays), 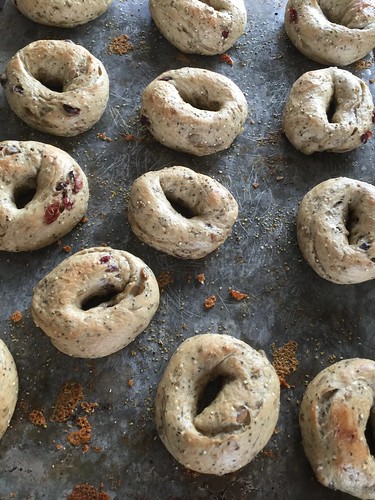 bialys (isn’t that weird how the onion filling turned pink?  I wonder if that’s normal or if it’s the pink Himalayan salt I used.  I can’t remember if that happened last time I made them), 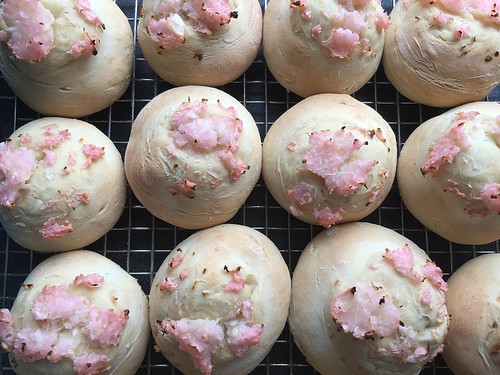 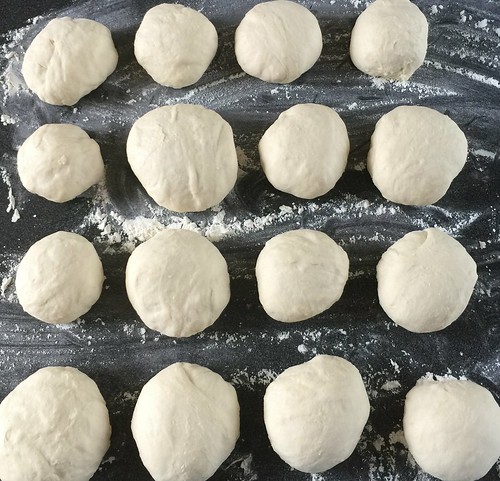 and these rosemary olive oil rolls. 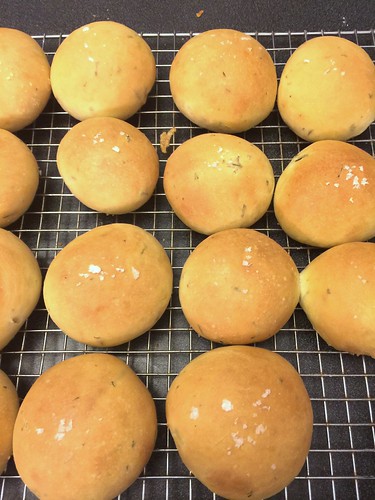 I was disappointed in them at first, but I think that’s because I ate one right out of the oven, and it probably had a bit more cooking to do.  They were perfect on Thanksgiving.  I stuck everything in the freezer, so it would seem nice and fresh when we got to Rangeley.

Sunday, pretty much the same routine except I must have been getting kind of burnt out.  I didn’t take nearly as many pictures.  This time, I made bacon and chopped up some scallions for our favorite mashed potato and bacon pizza.  It was really mostly for our first night at Rangeley, but Frank and I each had a sample pie.  I made salted caramel sauce for a delicious looking carmelita recipe which was to be my substitute for pecan pie.  Later, I actually made the carmelitas.  I almost wasn’t even going to make them, but they were so good (and easy) that I made another batch when we go home.  I also made a couscous salad which originally started out from this bulgur salad recipe.  (I know that would be healthier but I love the way those little pearls of couscous feel in your mouth.)

Finally, I worked up my nerve to make an apple pie.  I’m not sure I’ve ever really make a pie before.  I’ve made quite a few galettes (or maybe quite a lot – without looking, I can tell you the recipe I use is on page 702 of The New Basics cookbook) and a few chicken pot pies but never anything where the crust was really going to be the main focus.  I really wanted it to be good.  I didn’t have any shortening, so I googled “all butter pie crust recipes” and was happy to see that Smitten Kitchen was one of the first sites to come up on my search.  I love the way she writes.  She seems so practical and down to earth but her recipes have an element of fun to them – some kind of nice twist – that makes them interesting.  I followed her recipe and her tutorial for rolling out the dough, and I’m happy to say it was a success.  (No twists there, just a perfect, traditional pie crust which is exactly what I wanted.) 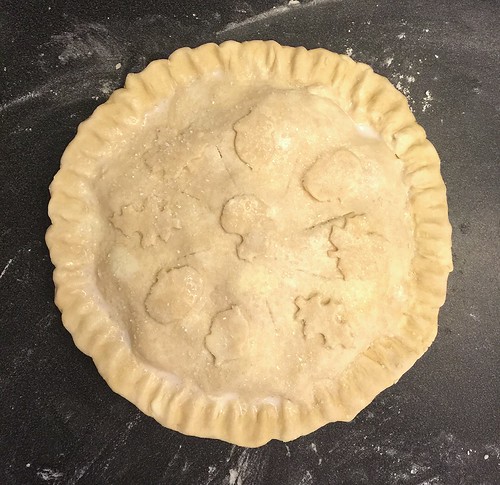 At home, I didn’t bake it but stuck it in the freezer for an hour or two then pulled it out and put it in plastic wrap and back in the freezer.  Even though Mike was under strict instructions to bake it before he put in the turkey (while I was picking up our oldest son in Vermont), he completely forgot, and we didn’t put it in until after we’d eaten.  It had been thawing in the fridge all day, so it worked out just fine.  It didn’t need any additional baking time after having been frozen.

It was really great having all that food prepared, so I didn’t really have to do anything on the actual day.  Mike makes all the stars of the table anyway; the turkey, the stuffing, the mashed potatoes, the gravy.  I thought it would be nice to have at least one green thing, so I made an adaptation of this salad.  The pomegranate that I had brought with us turned out to be really gross on the inside, so I want to try it again when I actually have all the ingredients.

The only thing I didn’t make that I want to try is this cranberry salsa.

Thank you all you great food bloggers for the great recipes!

Whew, I do love to bake, but after that, I’m not quite ready for any Christmas cooking baking marathons.

Are you going to the Woodford Food & Beverage Neighborhood Mixer tonight?  We were thinking of it but waited too late to get tickets.  Arggh!  If you go, let us know what you think.  So excited to have another restaurant coming to our part of town.