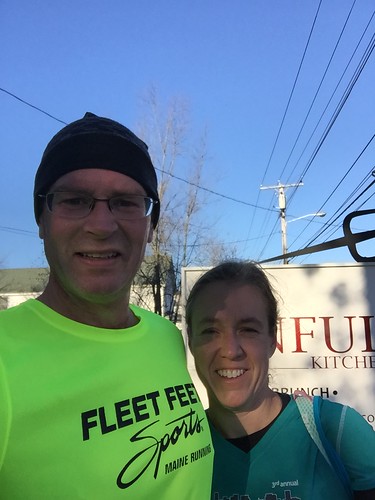 Not my best photo – but keepin’ it real

We’ve been meaning to try out Sinful Kitchen for quite a while.  Our older son had been there and was impressed by the lamb bacon and raved about whatever else he had (wish I could remember).  We decided to follow up our neighborhood breakfast run to Abilene with another restaurant on our side of town (albeit on opposite side of the ‘hood from Abilene).

Mike wanted to do ten miles, so we mapped out a rough route through Westbrook for something different.  Being near the ocean, we have a lot of pretty gorgeous running routes.  This was not the most scenic in comparison, but it was pleasant running through parts of the historic Stroudwater neighborhood and seeing some big open fields and cows not far from the city limits.  Coming back along Brighton Ave (Route 25) was not so pretty, but the McDonald’s and its bathroom came in quite handy.

I like to complete about 80% of our run before breakfast so running home afterwards doesn’t seem so hard.  We ended up a little short when we were almost back at Sinful Kitchen, so we ran down and back some of the side streets and ended up with almost eight miles before Sinful Kitchen snuck up on us.

If you want a quaint old brick building with hip decor in the heart of Portland to show off to your out of town friends, this is NOT the place to go.  If you just want a great meal, then definitely read on . . . 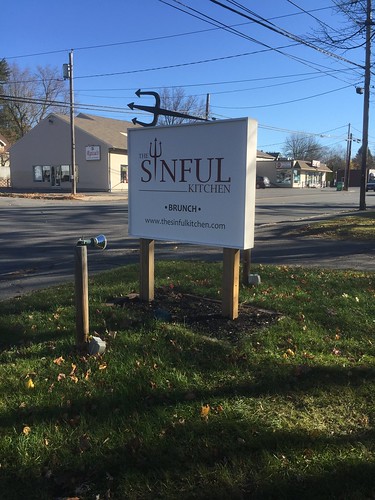 It’s in a perfectly fine section of Portland but on a busy street with very little curb appeal.  It’s on the way to places, not usually a destination.  Some restaurants seem to survive based more on their location (Dimillo’s comes to mind) than the quality or creativity of their food.  I like to assume that if a restaurant is doing well in a less desirable location, the food is probably pretty good.

We usually try (but actually rarely manage) to get to our breakfast destination right when it opens to avoid crowds and still have the bulk of the day left when we get home.  This time we were close, arriving at about 8:20.  We were only the second customers, so we had our choice of seats in the cozy, first floor of a house.  The place actually filled up quite quickly after that which I take as a good sign that we’re not the only ones who think the food is good and that the place will last.  By the time we left, there were people outside waiting for a table. 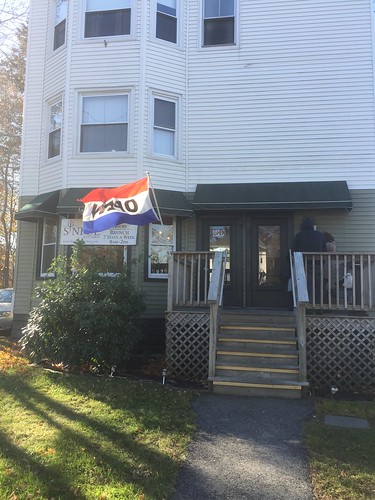 I love my breakfast mimosas, but it’s nice to have some variety every once in awhile, so I was excited to see that they had a relatively extensive drink menu – at least 8 different drinks plus some grown-up coffee options.  I didn’t stray too far from my classic mimosa and ordered the “Chambord Kir Royale” (I like my bubbles).  I’m sure it was no fault of the bartender’s, but I didn’t love it.  Mike thought it tasted like a Shirley Temple mimosa which seems like that would be good.  I like Shirley Temples, but to me it tasted kind of cough-medicine-y.  On the other hand, Mike’s Bloody Mary (I think it was called a Sinful Mary or something like that) was beautiful and delicious, but I’ll let him review that. 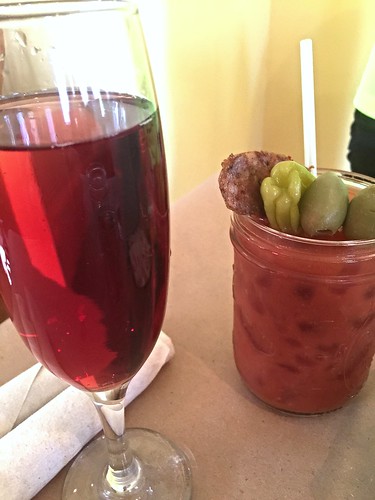 Food-wise, the menu had a lot of interesting options, so it was a real struggle to decide.  I kind of wanted to get the Monte Cristo – I’ve never had one – but I was worried that would be way too rich for a breakfast run.  I wasn’t really in the mood for something sweet (but check out the waffles oozing with chocolate syrup on their website photo – I’m getting those next time), so I decided on my old standby, Eggs Benedict.  I don’t always do this, but I kind of like to have the same thing each time I try a new restaurant, so I can make a more equal comparison.  They had all kinds of interesting different Benedicts.  I was very tempted by the one that came with crabmeat and avocado, but decided to go with the classic. 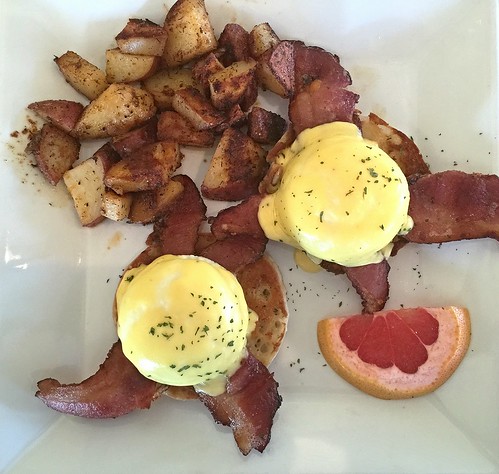 When it came out, I was excited to see that it came with bacon instead of the usual ham or Canadian bacon.  I like those just fine, but classic bacon is best!  It has to be well-done and crispy, and this was cooked to perfection.  (I don’t think it was lamb, though.)  I also liked that the English Muffin had a nice, crispy, buttery crunch.  The Hollandaise was more subtle than some I’ve had – it was flavorful but not overwhelming with a nice clean finish not that citrus-y bite at the end that I’ve experienced in other places.

I really fell for the potatoes though.  I’m a sucker for sides.  They were cut into nice little bite-sized pieces.  (I should not have to cut my home fries up with a knife and fork!) Some were crispy and some were tender.  They had a nice savory spice to them.  Mike commented that, flavor-wise, they were more like what Bayou Kitchen’s used to be.

All in all it was a good breakfast.  It’s nice to see another neighborhood place doing well.