Do you take pictures while you’re running?  I’ve heard of a lot of people doing this during races and many others frowning upon it.  I don’t feel strongly about it either way, but I do know that I don’t want to carry my phone during a race or lose precious seconds to take a photo.

However, for me, taking pictures during a regular old training run is a different story.  When it started getting cold around this time last year, I needed a little something extra to help motivate me to get out the door for a run in the wee dark hours of the morning.  It was really small, but I decided I would take a picture – just one – each day that I ran.  It was nice to have something else to think about besides how miserable I was to be running (even though I really wasn’t once I started).  I spent a lot of time on each run thinking about what my picture of the day would be.  It was a rough winter for us here in Maine, so it also helped my to try to see some beauty in the gray, desolate landscapes of our neighborhood.

Here are a few of my favorites:

And I have to throw this one in there.  It’s not pretty, but it was the first peak of bare pavement I’d seen in months, in late February.  It was such a beautiful site at the time. 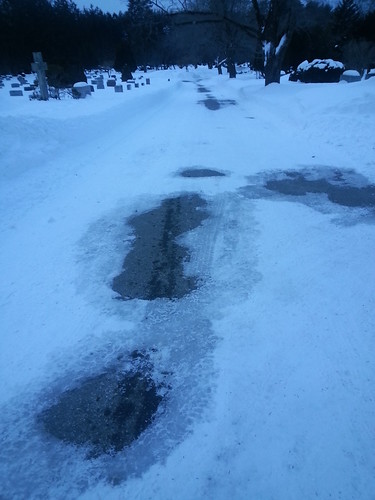 I took a picture like that every day for about four months.  It was great.  Then, I finally got a GPS watch (a Polar M400) and slowly got away from carrying my phone and also taking pictures.  It was so beautiful when I started running again last Thursday that I decided to bring my phone and snap a few photos.

I only have a few items of running clothes that have big enough pockets to hold my phone.  It was a bit too warm for a jacket, so it required some creative dressing. 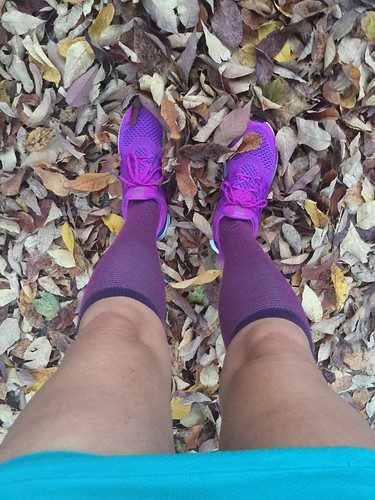 Unfortunately, it took quite a while for it to get light out, since it was quite a bit cloudier than the day before.  (On a side note, I was feeling quite invincible with my new head lamp and decided to go down a desolate dirt road that I normally enjoy running on in the day light.  Shortly after I turned down the road and started feeling a little nervous, I saw a dark, shadowy figure, dressed in mostly navy.  I hoped feverishly for it to be a tree stump until I saw it starting to move.  I was about to have my worst running experience ever and was on the verge of screaming and sprinting back in the other direction when I realized it was my shadow.  Whew.)

I never seem to be able to capture the beauty I can see with my eyes with my camera, but I enjoyed trying.  Here’s what I ended up with:

I saw a few really mini cameras at Best Buy recently which intrigued me a bit.  I really don’t like to be encumbered in any way when I’m running, so those are tempting.  Will need to do more research.

Hope you all had a great weekend.  We had a busy one with our youngest daughter’s First Communion and Confirmation, but we did manage to squeeze in a Breakfast Run to Union Restaurant in the fairly new Portland Press Hotel.  Reviews coming soon.