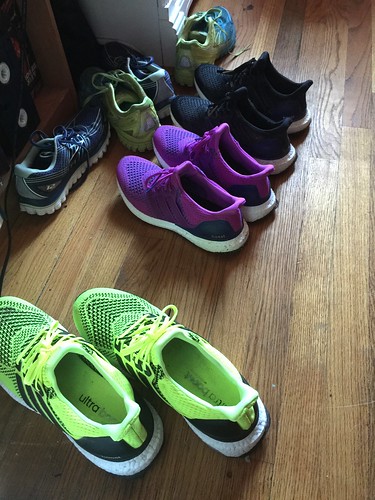 Today was my first day of running after The Maine Marathon.  It felt great.  Not the pace I would have liked after ten days off, but I’ll blame that on my TRX/Kettlebell/Pliyo class from yesterday.  My next marathon is over four months away, so no real pressure at this point anyway.

The morning was gorgeous.  I think it was our first day with temps under 40 (37 according to my phone), so it made it a bit hard to get going (funny to think that that will seem really warm in a few months), but after about a mile and half, I was really enjoying the cool weather.  It was dark for about half of my run, so I got to try out my new headlamp which worked out great.  Once it was light enough, I could see that the trees in the cemetery where I was running were really almost at their peak of fall color – almost glowing – it was beautiful.  I love running in the fall!

It feels so great to be running again.  The training program that I’ve followed for all four of my marathons (Hanson’s) starts on a Thursday, so it worked out perfectly for me to take 10 days off.  How much time do you take off after a race?  I’ve heard everything from no time at all to 1 day for each mile.  I was glad to have the time off – it seemed kind of like a vacation, but I was starting to feel the effects of not running. It probably seems strange, but it wasn’t just the physical aspects, but I also felt like I was being less tolerant and having a harder time concentrating.  I think having that “thinking” time while I’m running really helps me sort things out, so I can focus on work or whatever later.  And, if I’ve completed a run in the morning, no matter what else happens later in the day, it’s already been a good day!

Thanks for reading and happy running!