We woke up early the day before we left Montreal and decided to adventure out of the city to Mont Tremblant and do some biking along the P’tit train du Nord Trail.  Katie had discovered these locations before we departed for Montreal, but we did not have definite plans to go there; we are glad we did.  After three days of exploring Montreal by foot, bike, and rail, we felt the urge to expand our adventure.  Under overcast skies and a light rain we drove off from the hotel.  On the way to the mountains we found a nice breakfast stop (more on that in another post) and then an interesting stop on on the way back (more on that later too).

Once we were out of the Montreal traffic, the drive into the mountains of Quebec was picturesque and quite pleasant.  As wonderful as Montreal is, it was nice to have a break from the noise of the crowds and most of all the construction that seems to have engulfed almost every corner of the city.

After about a 90 minute drive, the GPS put us in the pretty village center of Mont Tremblant, but it sure didn’t resemble the Vail-like ski resort full of boutique shops that we were expecting.  Turns out we had missed the turn for the ski resort, so we turned around and saw the mountain and resort across the lake and headed in that direction.

Mont Tremblant lived up to expectations with beautiful scenery and a quaint yet bustling ski village with a multitude of summer activities for visitors.  A highlight for us was the free ski lift ride from the village to the base of the mountain.  We ended up doing things in reverse by taking the lift down from the village to the base and then walking uphill to visit shops along the way.  I suppose the extra exercise was a nice bonus, but I sure was feeling the week of biking and running.

After our visit to the resort and shops (no purchases, but well worth the look), we headed back down for some biking near the village center.  The P’tit train du Nord runs a couple of hundred kilometer in Quebec and offers great riding adventures long and short (which was our choice for the day).  We unloaded the bikes at a parking spot just outside the village and set off.  Along the way we encountered  many bikers, runners , and walkers.  We offered our easily detectable American “Bon Jour” to all we encountered.  As the week progressed I got over my accent fear and offered a few Bon Jours, but the Quebecois saw right through me and knew that was the extent of my conversational French.  They were always quite friendly though.  A cool adventure we hope to do some day is bake and camp along the trail as several groups of bikers we saw were doing.

After a short ride through the village and along the lake, we parked our bikes at a converted rail stop (it had a neat art gallery inside), and made our way for some lunch at Au Coin Resto Pub, part of the Hotel Mont Tremblant.  Our lunch included a delicious broccoli soup, delicious beet salad (with goat cheese that had wonderful flavor and little after-taste), and some freshly-made hummus.  It was a perfect lunch sitting on the patio and a great server who tolerated some terrible Francais on my part.  Katie managed to get us seated and order our meal using her new improved French.  The server knew I was hopeless linguistically and did converse with me in English during the meal.  At the end I decided to end our meal by asking, “Le factuer si vous plait.”  We’ve been debating this, Katie is sure that our server was just surprised that I was speaking au Francais, but I’m sure I butchered the words and offered  the wrong phrase.  In any case our server answered with a distinct, “What!?” after my request for the check.  We laughed it off and ended a great meal amicably.  Following the lunch we leisurely rode our bikes back the car and made our way back to Montreal for the final evening of our magical Quebec excursion. 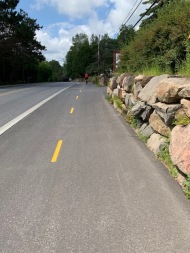 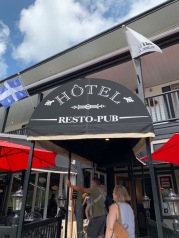