Trip Number: 2
Where: Tiqa Cafe & Bakery, Portland, ME
Date: Saturday, October 15, 2016
Katie: Latte
Addie: Hot Chocolate
Mileage: 3.74 miles
Bike Friendliness:  Good.  There is one bike “post” right out front.  You can also keep an eye on your bike from the outdoor patio.  One guy we saw while we were eating didn’t seem to feel the need to lock his bike at all – guess it doesn’t get much bike friendlier than that.  There’s also a larger bike rack on the other side of the park. 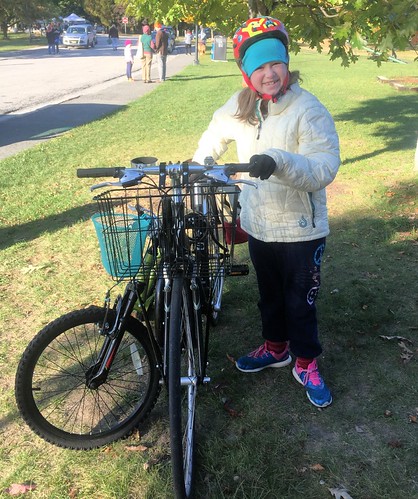 This was our best Coffeeneuring experience so far.  It was hard to get going because the temperature was in the 30’s, but we bundled up in all of our wool base layers, down jackets, hats, and mittens.  It didn’t end up being too bad cold-wise, but I knew Tiqa didn’t have much indoor seating, so I wasn’t quite sure how it would work out to actually consume our coffee.

Addie did great on the bigger downhills than what we’ve done so far in our neighborhood, and we both appreciated the bike lane along Deering Ave.  We enjoyed our ride through Deering Oaks park, but because it was also Farmer’s Market Saturday, we had to keep a close eye on cars pulling in and out of parking spaces.

I was surprised to see that Tiqa had moved much of their operation outside, possibly in anticipation of the Farmer’s Market crowd.  I was a little confused about whether to order outside or in, but I think it would have worked out either way.  I decided to try to use my Coffeeneuring experience to try something other than plain old coffee, so I went inside.

My plan B for if it was too cold to drink our coffee on the patio was to walk around the farmer’s market while we drank it, but we were excited to see space heaters and a roaring fire on the patio. 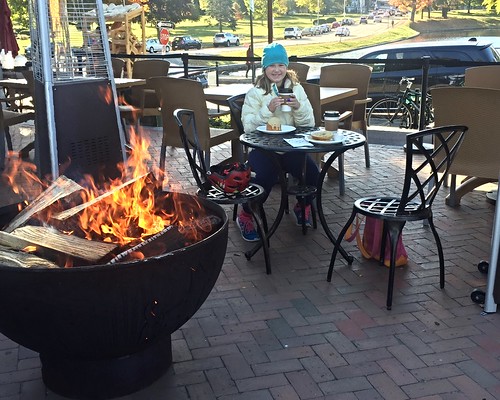 It was so comfortable!  We’ve been freezing in our house the last few days or so since the weather’s turned cold, so we parked ourselves as close to the big fire pit as possible.  It was glorious.  The first time I’ve felt my body fully relax in days. 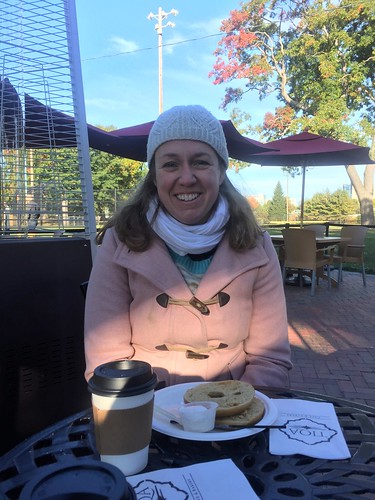 After a few minutes we actually had to move to a table farther away because we were too hot! I will definitely go back on a cold day with Mike for lunch and a glass of wine or two.  You almost feel like you could be in Europe when you’re there.

I ended up getting a Latte, and it was delicious!  Addie cannot be convinced to try anything other than hot chocolate, so she went with that.  Neither one of us could pass up the beautiful and sinful looking Cinnamon Babka, so Addie had that, and I had a Za’tar bagel with cream cheese which I had had before and enjoyed. 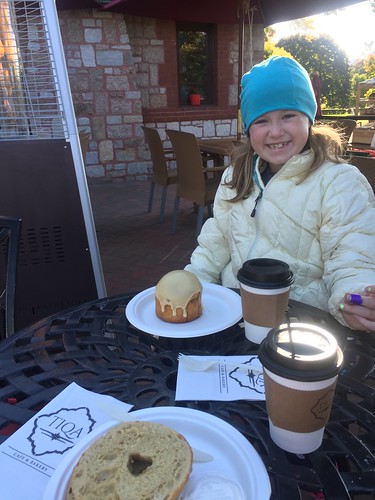 Their breakfast sandwiches are also delicious, but I skipped that for today.  I loved my bagel and latte, but Addie kind of struck out.  The frosting on the babka was great, reminded Addie of the base for a Gelato Fiasco gelato, but the rest of the babka was a bit dry.  Her hot chocolate was also a little watery, but I’m not sure that hot chocolate is a specialty at very many places.

Honestly, the atmosphere was so great, that nothing else really mattered.  I was tempted to take a baguette home but opted for some veggies at the Farmer’s Market instead. 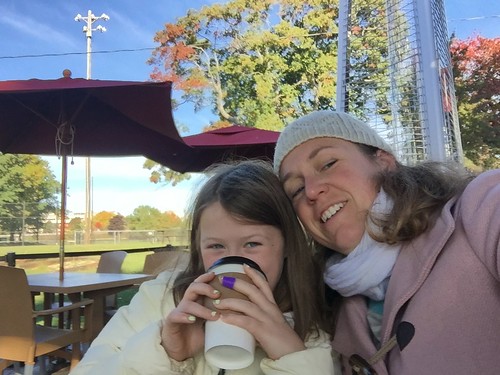 We were late for the mandatory family apple picking that I had instigated, but we were enjoying ourselves so much, we decided to wander through the farmer’s market. 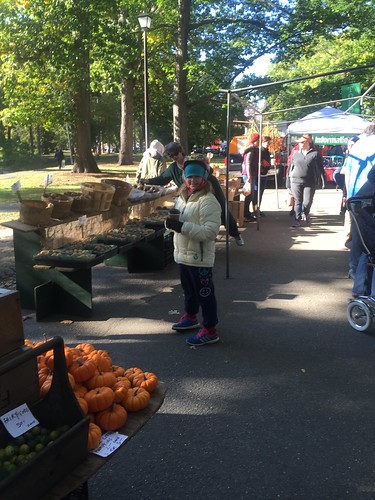 Such a great vibe there.  I really love the drummer that often plays there.  Addie dropped some money in his basket. 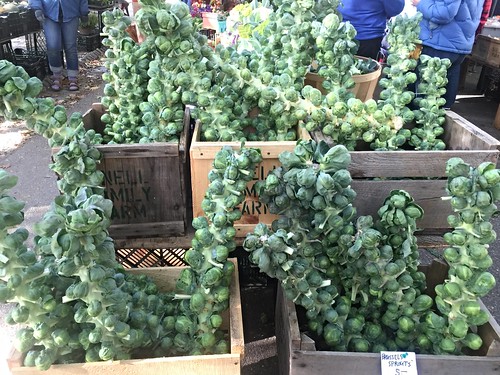 We bought some fun stuff, some Portsfield Dry Cider for Mike – such gorgeous packaging, some husk cherries which we’d never tried before (delicious but weirdly taste like Captain Crunch Crunchberries), some beautiful little tomatoes, and some funky decorative something-or-others. 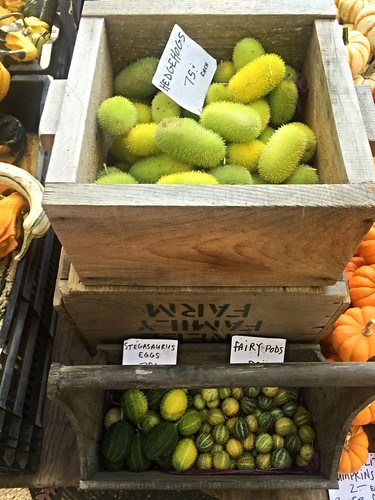 We powered up all the hills that we’d ridden down on they way there and still managed to go apple picking.  What a perfect fall day!