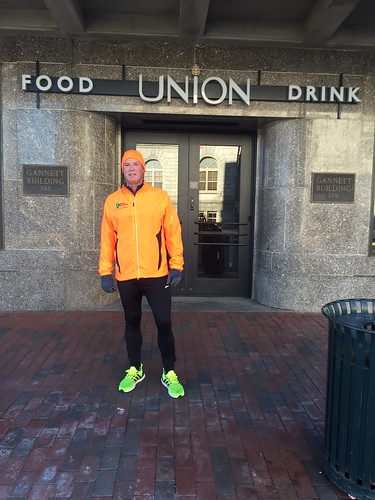 Sheesh.  Mike has been beating me in both blogging and running lately.  And it really doesn’t bother me at all.  We’re not competitive at all.  Umm, so. not. true.

Anyway, even though it’s been another Breakfast Run and a Happy Hour Run since our breakfast run to Union last weekend, I still want to record my thoughts on our lovely breakfast there.

I wanted to make sure we got at least eight miles in, so we took the long way to Union and got in about 5.5 miles before we arrived.  We met a running acquaintance of mine along the way.  Super nice guy who I’ve only ever met running.  Pretty sure he told me his name is Rex, but who’s named Rex anyway?  Maybe I have that wrong.

A few weeks ago, maybe a month ago, we had a delicious breakfast at The Corner Room which is right around the corner (pardon the pun) from Union Restaurant in the pretty-new Portland Press Hotel.  I had read about it, so we decided to walk through before we started running back home.  The decor was super cool especially one hallway where an entire large wall was decorated with old typewriters.  It was fun to look at those and reminisce about our days in typing class with Mrs. Sturdee.  I think we were the last class in our school to use manual typewriters.  Honestly, that was the most useful class I took in high school, but I digress.

After we walked into the hotel lobby, we decided to pop into the restaurant to scope it out for a later visit.  We’d already been thinking about trying to stop by for drinks after reading about it on Portland Food Map.  The host was super friendly, and even though we mentioned we’d already eaten, he invited us to look around and chatted with us about being “local”.  Last weekend, when we were looking for an early Breakfast Run, I went to my trusty Yelp app to see what would be open early.  With the early hour, and the places we’ve already tried, we were down to the bakeries and the hotel restaurants.  We didn’t hesitate when Yelp reminded us about Union.  (Granted, most of the reviews were about dinner, not breakfast.)

We had a pleasant, cheerful run on the way there.  It was chilly, 30-ish (which sadly will be excitingly warm in a few months).  We must have been in a really good mood because we actually broke into song a few times.  There’s race pace, conversational pace, and the little-known-singing pace.  (If you must know, both times we were crossing railroad tracks – Folsom Prison and City of New Orleans.)  Notably, it was our first day in tights (vs. shorts). 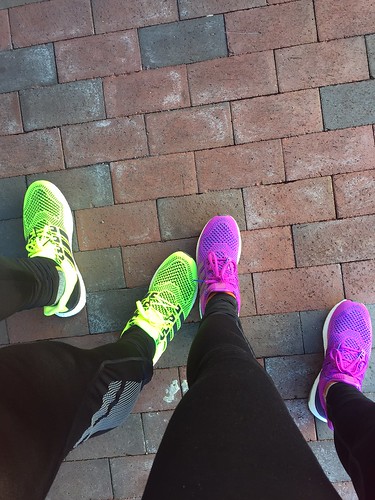 The same friendly host welcomed us back.  The restaurant was pretty full, but we were able to get a table right away.  The decor is modern and very bright and airy which I liked.  Even though I brought dry clothes to change into (the host walked me all the way across the lobby to show me where the restroom was), I was still a bit chilly, but there was a cozy fireplace going in the lobby that we enjoyed for a few minutes before hitting the road again.

We ordered our favorite breakfast drinks, a mimosa for me and a Bloody Mary for Mike.  The mimosa was delicious with fresh-squeezed O.J., but it was fairly small.  Size-wise, I have yet to find a match for the Manmosa from Brian Boru.  Mike wasn’t crazy about the smoky flavor of the Bloody Mary. 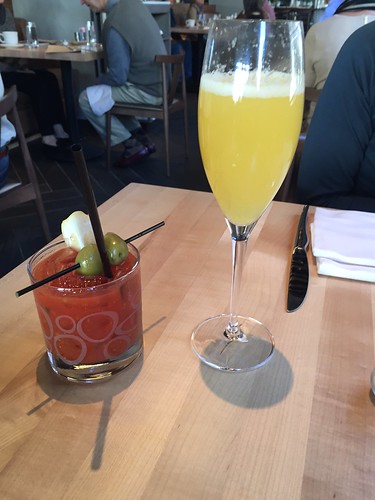 The menu didn’t have a ton of options (maybe 5 or so real breakfast options – I don’t count oatmeal or yogurt and granola), but I suppose that makes it easier to decide.  We were both intrigued by the European style, charcuterie-like Simple Beginnings breakfast which Mike ended up ordering.  I didn’t want to get the same thing, so I went with the French Toast, and I love me some breakfast potatoes, so I ordered a side of those as well. 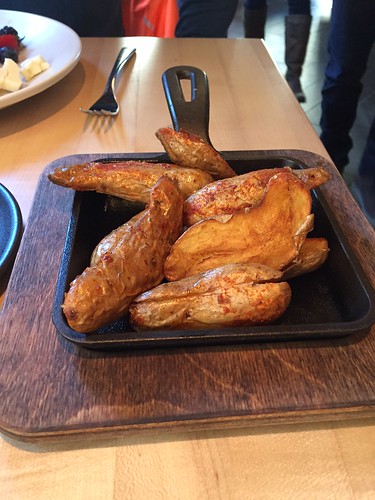 My French Toast (a.k.a Pain Perdu) was really good.  The bread was thick and light and airy and the butter plentiful.  There were some pretty berry garnishes and local maple syrup. 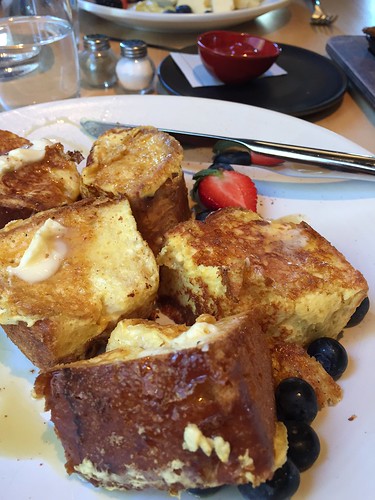 I have to say though, that Mike’s breakfast was much more interesting.  I scattered some pieces of the cheddar from his plate on my breakfast potatoes and let it melt a bit (kind of like Raclette) and dipped it in the fennel mustard, and it was quite delicious.  (Pretty much hate fennel, but this was good.)  It’s mostly just on Easter that I have a nice thick slice of ham, but the ham (a.k.a Salumi) on his plate was also delicious and the fig jam reminded me of having a nice quince paste with a charcuterie plate. 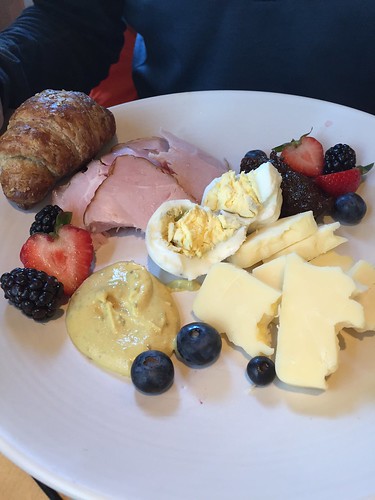 My only complaint about his meal was that the croissant that came with it was miniscule.  I like to have a bite of carb with each bite of protein, so I fully supported his idea to order a side of toast.

It was quite slow to come, so that was too bad, and when only one slice of toast arrived, I thought it a bit stingy, but it was delicious, and if I had to guess, I think it might have been a slice of pain de mie from one of our favorite local bakeries, Standard Baking Company.

Overall, it was a really nice experience.  As Mike said, service was a bit slow, but the wait staff was so friendly and apologetic, it was really fine.  At the end of our meal we were served an effervescent ginger carrot drink which was a really nice touch, kind of like a digestif. 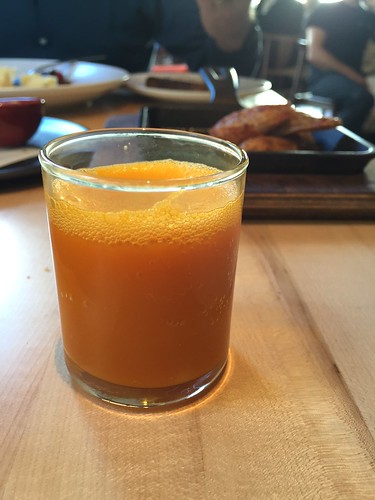 Most of the breakfast diners seemed to be staying at the hotel, so I’m not sure it’s become a standard Portland breakfast place –  yet.  We were a bit jealous of the hotel-stayers and vowed to book a night in the off-season.

Weighed down by drinks and breakfast, we got off to a somewhat slow start heading home, but after the slight uphill of Congress Street, we had a nice long downhill on State Street and made the last 2.5 miles home no problem even though the pace was quite a bit slower and there was no singing.

Thanks for reading.  Happy running.  And eating.