This was a great race!  We really lucked out with the weather.  Hurricane Joaquin had been threatening earlier in the week, but it ended up being a beautiful, crisp New England fall day.  We both really struggled with the decision of short vs long sleeves but ended up with short and didn’t regret it.

It was my fourth marathon, but my first in my home state, and Mike’s first marathon ever.  We were both pretty nervous and excited.

We went to packet pick up the day before.  Parking was easy, volunteers were super-friendly, and there was a pretty nice expo considering the relatively small size of the marathon.  Although it didn’t even touch the Boston and Grandma’s expos, there were at least five different clothing booths which was a lot more than we expected from a one-running-store town.  I do enjoy my shopping and having a lot of options, but it was nice not to be jostled by millions of other runners while looking around.  The goody bags were full of interesting, and kind of random but useful things; vitamins, band-aids, cold medicine.  The race shirt is cool with little icons of Maine things hidden on the side panels. 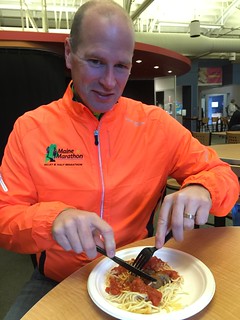 We wanted to have the full marathon experience, so we went to the pasta dinner the night before.  We wanted to mix with some other runners, but sadly, it wasn’t very well attended.  With all the great restaurants in Portland, I probably wouldn’t normally choose mass-produced spaghetti either, but it tasted good enough, and we got the experience.

We only live about a mile from the start, so we really debated whether or not to drive.  We ended up deciding that having the car for a home base would be nice and even walking that mile home after the marathon would be a struggle.  The parking turned out to be easy and plentiful with the USM parking garage open and free for runners.  The university also opened their gym for runners which had bathrooms and showers, so it was nice to be able to hang out inside and warm for a bit before heading to the start line.

There were lots of port-a-potties available, too.  We used both a bunch of times.  There was never more the 4 or 5 people in line which was cool.  After that we were kind of late getting to the start line which was wall to wall people.  We didn’t bother to try to line up in any kind of pace group and just jumped into the fray from where we were standing toward the end of the group.

We only ended up waiting for about 5 minutes from when we lined up until we started which was great for me because that’s when I feel the most nervous.  Nervous-wise, I was totally fine once I started running.

Since the race was so close to our house, we end up running the same or similar routes a lot.  I wasn’t sure how that would be, since I kind of think not knowing is better.  I’m still undecided about which way is better, but it turned out fine knowing the route pretty well.  There were some nice surprises along the way like a stretch near the water around miles 4 and 5 that I didn’t know about and will definitely run again.  And some not nice surprises like there being more hills than I anticipated in the parts that I hadn’t run.  But, I did know when I’d hit the last hill and was almost home, so that was good.

I really started struggling at about mile 23 1/2 or so.  I had my last Gu just before that.  It was chocolate, and no matter how much I liked my lips, I just couldn’t get it all off.  I’m worried it’s probably still there in my finish line photo.  I’m surprised I didn’t get sent to the medical tent for foaming at the mouth with bizarre brown ooze.  Anyway, I knew our two youngest kids were cheering us on at about mile 25, so that kept me going a bit longer.  It was an effort to cross the street and high five them though.  I’ll have to tell them to be on the other side next time. 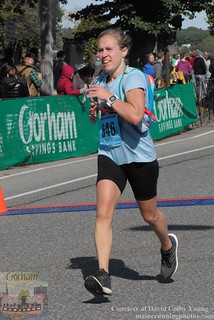 Then, finally, on to the finish where the rest was a blur for a while.  I walked (I mean stumbled) back to the car to get my warm clothes.  (They had a baggage tent, too which I would take advantage of next time, since it was much closer.)

There was plentiful food at the end; chocolate milk, bananas, oranges, pizza.  I was most impressed by the pre-peanut-buttered bagels, because who is capable of doing that after a long race?!

We had fun hanging out at the finish; snacking, recovering, waiting for awards in the sunshine and just basking in the glory of our accomplishment and the great running camaraderie.

What I would Change
I know it’s snobby, but I like my marathon shirts and medals to say (okay maybe scream) marathon.  This one does, but it also says half and relay with nothing to indicate which one I did.  I also kind of like it when you don’t get the shirt until the end, and it has the word “finisher” on it – preferably in big bold letters somewhere.